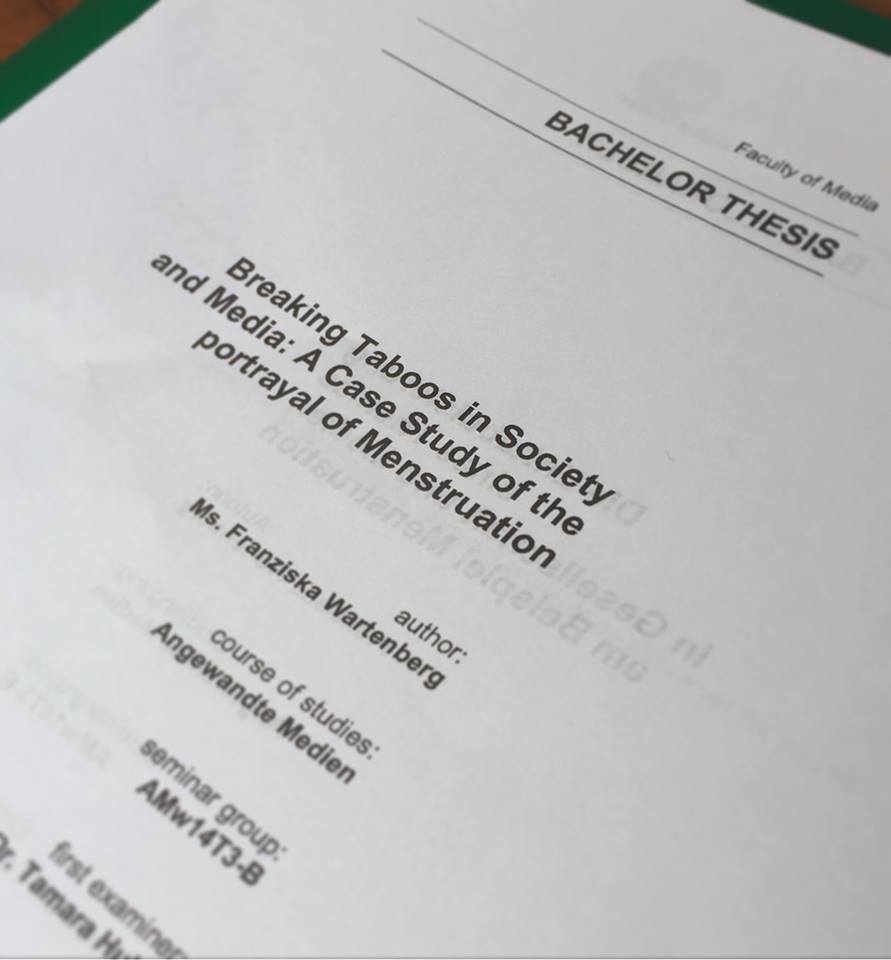 Recently I finished writing my Bachelor’s thesis about the portrayal of Menstruation in media and society – a real taboo topic. So taboo in fact, that the coordinator of my German university not only refused to help me but actively discouraged me from formulating this topic in a way to find a supervisor. (She told me that I would never find a professor who would approve this topic. To paraphrase what they said in English, there is no scientific bases for this topic and the reason for that: it’s a taboo).
Now that I’ve successfully completed my bachelor thesis and defended it before a panel of professors in my final presentation, everybody involved has recognized the importance of this topic since ignorance surrounding menstruation has wide reaching consequences for the environment, the economy and financial and social gender equality.I’m not trying to convince you to throw a “period party”, neither am I going to wave a used tampon underneath your nose. I just want people to be aware of some important facts:

Half of the population of the world loses approximately a 30-50 milliliters of blood every month (for approximately 40 years of their live time – this makes up six and a half years in total). Although this process is crucial for the origin of every single human being, menstruating people have been heavily discriminated in many major religious texts and even scientific medical consensus up to the middle of the 20th century. The connotation of menstruating women evokes images of poisonous monsters, the devil, psychological and physical deficits and above all, in the vast majority of cases, being depicted as unclean and inferior. (This is part of the old testament: “When a woman has her regular flow of blood, the impurity of her monthly period will last seven days, and anyone who touches her will be unclean till evening.” To sum up the entire text, menstruating women should be completely excluded from society and live like a hermit for seven days.After which, in order to return to civilization they are also required to bring two doves to a priest who will sacrifice them in a ceremony to “purify” the woman. If people don’t guard against this “uncleanliness” the whole society will collapse. [Leviticus 15:19-33]. No bullshit.)

Ofcourse, you can say that as a society we have developed past such extreme views, but in fact this attitude still presents itself in more subtle ways. Nowadays women are still being stigmatized (She´s just grumpy because she’s on her period. We can’t have a female leader – what if she starts a war when she gets her period!!??) and portrayed as hysterical, over emotional and not being able to make clear decisions. (Remembering Trump’s comment about Fox moderator Megyn Kelly….)
As a consequence women and girls feel ashamed and uncomfortable, whisper to each other like criminals when they need a tampon because of their “biological weakness” and are not taken seriously when they have ailments related to their period.

Worldwide, every day, women and girls are being held back in social situations, education and work, don’t have access to sanitary products or are being excluded from society due to lack of education and are being declared as unclean and inferior.
In India 20 percent of girls drop out of school with the beginning of their menstruation. In many other countries women are socially prohibited from leaving the house during their menstruation due to a fear that they are contagious and could spread diseases like cancer.
Even in Germany, half of the women say that they feel uncomfortable in social situations while menstruating. 16 percent of them have described missing school, work or other engagmentents because they are afraid (!!) that others might notice that they are on their period. So in fact, this social stigma is so strong that people will remove themselves from society during their period!

Many women feel shame when buying tampons in a supermarket (in Germany, this is reported as one out of five) and on top of that, it costs them an arm and a leg! Pads and tampons are taxed heavily almost everywhere. In Germany, they are taxed 19 % which is the highest possible for general goods (higher than totally necessary items like salmon caviar or cut flowers).
If you ask yourself “who would make up such a rule?” it doesn’t take long to realize: People who don’t menstruate.

Over a lifetime, women pay on average a four-digit number just for their period (according to bloodyluxurytax.de 8600 Euro including almost 1650 in taxes).* This reinforces gender and economic inequality, while there is already a gender pay-gap in Germany and on top of that women are required to pay an extra cost every month for their essential needs.
Btw for everybody who hasn’t heard of it before, there is a reusable, hygienic alternative to tampons called the menstrual cup (or moon cup) which is of course not made of ceramic but medical silicon

😉. Not only is this a lot cheaper because you buy it once for around 20 Euros, and it lasts for years but it is also a better option for the environment because it prevents thousands of tonnes of disposed tampons and pads ending up in landfill.

Luckily, in recent years there is movement starting to grow in order to change the attitude towards periods. In some countries the “tampon tax” has been abolished or lowered. Even on the day I presented my thesis, Scotland decided to give sanitary products away for free to low income women. (In your face university!!)

This is part of the reason why I am posting this and why I wrote this thesis in the first place. To stop period shaming, raise awareness of economic inequality and the mistreatment of women because of this natural bodily function. We have to end this taboo in order to create a more fair and equal society. So I ask you to talk about this issue, raise your voice against this stupid tax, write papers about it and embarrass ignorant professors (my examiners – especially the male ones – were left speechless and had to acknowledge the value of this work) – and everybody calm down. It’s just a bit of blood.