Skip to content
Bangladesh Featured Human Rights Window for others

Maskwaith Ahsan: Afsana Ferdous, a 24-year-old architecture student, was brutally raped and murdered recently. The victim’s family and friends are accusing student political leader Habibur Rahman Robin of the crime, He’s affiliated with the student wing of Awami League, the party in power in Bangladesh. Afsana’s family is constantly being threatened by unidentified people to remain quiet and let another major crime get shoved under the carpet. 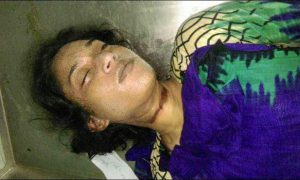 Protesting against the rape and murder of Afsana, members of a student organization were attacked by the hooligans of the student league to which the accused Robin belongs to. The attack left one protester injured.
Law enforcement agencies are sincerely investigating the Afsana murder case but as the suspect belongs to the party in power, Afsana’s family is under severe pressure not to pursue the investigation. If such pressure continues and the government takes no action it’s unclear if Afsana will ever get justice and if her family will ever get closure.

The victim’s family has appealed to the Prime Minister for justice. But in the recent past many rape-and-murder victims’ families have been deprived of justice as the criminals belong to the power structure. As if the pain of Afsana’s brutal killing was not enough for the family to bear, they also have to face threats from the killers. It’s as if the family lives in a primitive colony ruled by gangs backed by the colonial masters.

What makes matters worse is that Afsana comes of a family that fought the liberation war of Bangladesh. A war veteran’s great grand-daughter faced the same tragedy as the rape victims of 1971. Afsana’s case places a question mark on the present definition of pro-liberation war ideology.