Adi Chowdhury: They emerged from remote villages lurking silently within Bangladesh, but their talent refused to remain unheard. Their skills and potential struggled to escape the confines of their unenlightened societies, but their passion and dedication refused to be swept under the rug. 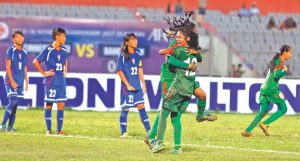 Sexism and superstition littered their path to success, but they refused to be impeded by such forces. Prejudice and degradation snapped at their flanks, but they attained their goals and well-deserved titles through leaps and bounds.

The Bangladeshi U16 women’s football team has forged through one obstacle after another, and has emerged victorious and proud. The wonder women of Bangladesh have worked tirelessly to represent and glorify this nation, and they have not disappointed us in any sense of the word. Rather, they have every right to hold their heads high and walk with pride in their hearts and confidence in their stride. They represented Bangladesh with valor and vigor. With diligence and dedication. With relentless effort and ceaseless devotion. With courage and determination. With fiery souls and searing hearts, even in the face of adversity and challenges.

Do they deserve anything short of a proud embrace as they return to Bangladesh? After all they did, after their tireless contribution to the perception of Bangladesh, after their perpetual onward march towards representing their country to the fullest…should we not hail them as heroes, as the wondrous bright souls they are? Are they not the emblems of success in the world of sports? Are they not beacons of social progress and empowerment as well?

Alas, as they return to their hometowns, I can only shake my head in disappointment at the kind of reception they suffered in reality.

The women made their way back to their villages in a stuffy, filthy, below-standard bus lacking air conditioning or any facilities appropriate for the young heroes of Bangladesh. A local TV report also stated that the female football players also suffered a hailstorm of abuses and mocking words on the bus.

That’s not the end of it—worse problems were yet to arise. Upon reaching their hometown, the football team informed their schools that they would be attending the Bangladesh Football Federation (BFF) training camp and also a reception in the team’s honor on September 17. This means that the girls would have to miss out on the School Level Summer Football competition, a soccer program organized by their schools. 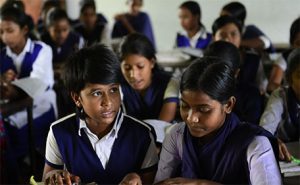 The school, rather than accepting these reasonable terms peacefully, reacted in a reckless and completely unnecessary manner—by threatening to expel the girls entirely. Nine of the girls were threatened with Transfer Certificates (TC), and incurred the wrath of the schoolteachers.

Even more horrifying is what befell Sobuj Mia, the father of TaslimaAkter, the acclaimed goalkeeper of the Bangladeshi soccer team. Her father was assaulted and violently beaten by JubedTalukdar, the physical education teacher of the girls’ school. Jubed was outraged that the girls would be unable to play in the school’s program, and thus attacked Taslima’s father, reportedly “kicking him after knocking him to the ground.”

This ongoing controversy is a sign. It is a sign of the remarkable prejudice and twisted perception that many Bangladeshis have of successful soccer players, or empowered women in general. As a humanist and a feminist, I can only find the perpetuation of such prejudice abhorrent, and a remnant of our previous dark superstitions and sexist ideologies.

If these football superstars were male, they would undoubtedly be showered in streaming praise and ceaseless celebration as they returned home. They would be adorned with nationwide fame and heartfelt love from soccer fans all across the country. They would be treated to comfortable, luxurious, impeccable transportation to their home towns, where they would continue to be hailed as heroes and live long in the minds and hearts of Bengalis.

Then why are the female soccer stars receiving such a vastly different treatment? Why are they being threatened with expulsion and punishment from school? Why are they being called cruel and mocking names? Why are their parents being assaulted? Why is their work and contribution passing unappreciated?

This prevalent prejudice women face ceaselessly is a manifestation of the distorted perception that many Bangladeshis have of empowered women. Many people still view women empowerment as a “problem” rather than a goal. They believe that the liberation of females is needless and laughable. They are under the delusion that promoting the status of women in society is a hollow and empty task which will yield no benefits. Some go even further and believe that woman empowerment is a negative social movement, and try to stifle this liberation at all costs. They believe that all credit, all laurels, and all titles deserve to be bestowed upon men, not women, since “women aren’t really capable of anything, and don’t deserve recognition for their deeds.”

This toxic mentality is what handicaps women’s pathway to equality and freedom. A startlingly high number of Bangladeshis intend to systematically undermine the battles for empowerment waged by women. Some laugh at women; some jeer and mock them; some outright despise them. These outlooks only poison Bangladesh and cripple this nation with unfading prejudice.

I can only lend my support to those working to brighten this nation’s perception of women, and aid their road to empowerment. It is a shame how our young football heroes have been subjected to abuse and assault. These young, bright women are our future. These hopeful, courageous, vigorous women will be the ones leaving an indelible mark on the future of this nation. They will be among the ones contributing to Bangladesh’s ascent from prejudice and poverty. They will be the beacons of a better future, and will shatter the sexism and social barriers trying to restrain them.