When I asked 18-year-old ROYA  student, Freshta Ahmadi, what her favorite quote was, she shared a Chinese proverb with me. “Learning is a treasure that will follow its owner everywhere.” The quote is a perfect reflection of who she is. If learning is a treasure, then Freshta is rich. She is hungry for knowledge and struggles to claim it and share it with every opportunity available.

In spite of unimaginable obstacles, Freshta is a bold and determined young woman who shines with self-confidence. She lives with her family of nine in a cave that was carved 1500 years ago in the sandstone cliffs of Bamyan, Afghanistan – a valley in the Hindu Kush mountain region which lies on the Silk Road. The caves were originally carved and used by monks between the 2nd and 7th centuries when Bamyan was a Buddhist religious site. Ten feet inside her family’s large cave opening, an exterior wall has been built with rocks, mud, and pieces of plastic creating a kind of portico before the entrance to one of their three rooms. Two of Freshta’s dust-covered, rosy-cheeked brothers stand in the weathered, wooden doorframe. A rusty tin stovepipe protrudes from the wall and black smoky residue has stained the cave overhang and the upper part of their outside wall.

Bamyan is most famous for the giant Buddha statues that were hewn directly from these cliffs in the early 6th century. The two statues, known locally as “Solsol” and “Shahmama,” measured 175 and 115 feet and were the tallest standing Buddha statues in the world until they were blown up by the Taliban in March of 2001. Freshta’s home is situated on these same cliffs that are dotted with caves in a village called Jograkhel which lies to the East of the remains of the two giant statues.

I learned about Freshta a little over a year ago when I was beginning a sponsorship program for needy and motivated Afghan youth. Having worked with young Afghans for the past ten years, I knew that English, computer skills, and internet access were game changers for young people in the country. After a visit to Afghanistan in the winter of 2016, I realized that acquiring these skills was out of reach for the impoverished youth who needed it most. I began the ROYA Mentorship Program, an initiative of Resources of Young Afghans (ROYA means ‘dream’ in Dari), to match needy high school students in the remote province of Bamyan with sponsors who would pay for their English classes and weekly internet access.

In a country like Afghanistan, it is nearly impossible to break the cycle of poverty in families. The education system is very weak. Child labor is high. There are virtually no social services. The illiteracy rate is among the highest in the world and the country suffers from the devastating effects of four decades of war and insecurity. Freshta lost her mother when she and her sister were toddlers. Her mother likely died of an easily treatable illness because there were no hospitals nearby to treat her. Freshta’s father remarried, had five more children and supports the family as a day laborer earning less than $45 a month while being jobless for most of the

winter. Like 60% of the population, her father is illiterate.

It’s a miracle that Freshta has found so much success in her challenging life. She is positive and hopeful about her future. She credits her attentive father as the role model for her kindness and goodness but admits that she was her own role model in terms of her education, talents, and abilities. She knows that education, hard work, studying well, self-confidence and honesty are the keys that unlock the future she has planned. She is determined to study abroad, become a doctor and return to Afghanistan. She also believes that being courageous, helping other people, avoiding jealousy and having great patience in face of problems have helped her to be where she is today.

Freshta was recommended to me by the young man who coordinates the ROYA Mentorship Program in Bamyan, an English teacher and the founder of Pioneer Educational Center where ROYA students study. He knew she was active and talented and didn’t have the funds to continue her English classes. Freshta has been passionate about learning English ever since she attended a free, three-month course six years ago and had the highest score in the class. Unable to pay the fees after the free course ended, she held onto her goal of learning the language until 2016 when she managed to pay for one semester at Pioneer Educational Center. She wasn’t able to continue and, fortunately, that’s when our program began. In the year that she has been studying with the help of a ROYA sponsor, her skills have improved dramatically. People who have never met her are impressed with her abilities. Today she says, “I love studying English. It’s an international language. English is the key of science. English is the language of the computer.”

In her quest to seek and claim her treasures, Freshta emerges from the heart of the mountains each morning, climbs down a rocky and dusty path and walks one hour to attend school where she holds the second position in her 12th grade class. After returning home at lunch, she walks another thirty minutes to attend her private English class where she has held the first position every semester for the past year. Since she was 13 years old, she spends two hours a day running a school for young children in her home. She teaches them reading, writing, and math.

Freshta’s family lives in three rooms with no electricity and no running water. Two of Freshta’s young brothers have to walk one hour each way, twice a day, to get water from a spring for cooking, drinking, and bathing. The family has to carry their dirty dishes to the spring to be washed. They cook their food and boil water over a wood fire. The rooms are usually unheated in the winter even though Bamyan is a high-altitude region with bitterly cold winters. Freshta claims that temperatures in the cave are somewhat regulated and that her father is completely jobless in the winter and unable to buy enough firewood.

I asked Freshta what her advice is for other young people who struggle with poverty, lack of services, and uneducated families. She said, “They have to struggle in the way of education. Education is the most powerful weapon we can use to change the world. The importance of education cannot be stated enough. It’s a self-enlightenment process. Education helps us to become a knowledgeable person. Education gives us self-confidence and makes us self-aware. Each of us is good at something and we need to discover ourselves and use our talents to improve our future.”

Article reproduced with permission from Official Website of ROYA. 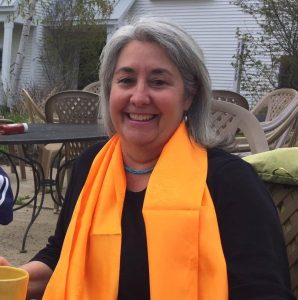 Kara Lozier is the founder and director of ROYA – Resources of Young Afghans, through which she has been counseling, mentoring and supporting young Afghans in various ways. Independently and as a community coordinator for U.S. government-sponsored exchange students, she has supervised, lived with and/or placed students from over two dozen countries in Africa, Asia, Europe, and Eastern Europe. It was through this work that she developed her passion for working with Afghan students and founded ROYA in order to formalize her role as an academic advisor and mentor for Afghan students.