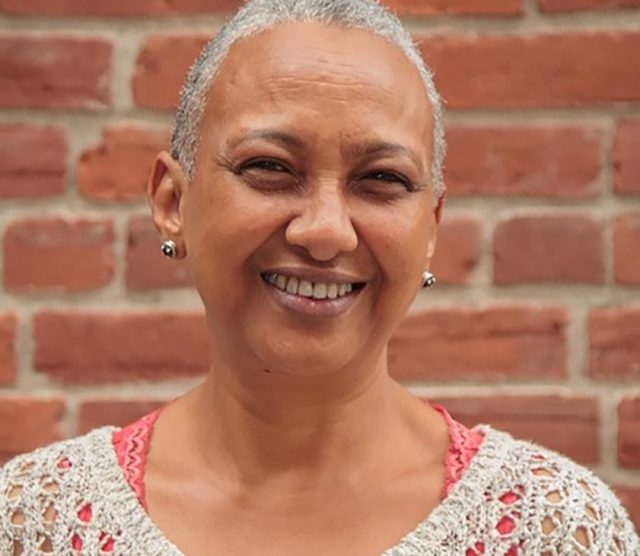 “We needed to be flexible [as women activists] and bend to the wind. With our work, we were able to navigate dangerous spaces and yet also open spaces for women.”

Fahima Hashim is a Sudanese feminist and activist, now living in Canada. She was the founder and director of the Salmmah Women’s Resource Centre in Khartoum, Sudan. This feminist centre focused on documenting violence against women and then using that documentation to demand reforms to Sudan’s legal system — in particular, its Public Order Laws. Sudan’s Public Order Laws regulated how women could dress and act in public. Contravening those laws could result in harsh punishments. The Centre also worked to change the laws governing rape, as women who came forward to report a rape could be charged with adultery. For this ground-breaking work, Fahima was targeted. Fearing for her safety and the safety of her small child, she was forced to leave the country.

Can you tell me about the work you were doing in Sudan as a woman human rights defender?

At the Salmmah Women’s Resource Centre, we had two main areas of work: one was the prevention of violence against women; and the other one was peacebuilding. We had to navigate in a context where it was very difficult to work on these issues. We needed to figure out how we could work on these issues and not jeopardize the women we work with, as well as our own organization. The environment was very complicated. The political situation was not conducive to do any kind of on work on issues of violence against women or issues of peace. The government was not interested in changing its policies — or even bringing these issues to the surface.

Given the challenging context, what strategies did you employ to be able to do your work?

Our violence against women program focused on two issues: one was documentations of cases of violence against women in Sudan; and two, legal reforms. The documentation helped with the legal reforms because we built our cases based on the documentation. We looked at the broader issue of how the laws denied women their right to safety and dignity. For example, the Public Order Law regulated women in public spaces. It looked at what they wore; where they worked; how they acted. So, if you were not wearing what they called an “Islamic” attire, then you could be taken to court and lashed 40 times in public.

If you don’t read the situation well, you may not be able to accomplish the work you have planned. We needed to be flexible [as women activists] and bend to the wind. With our work, we were able to navigate dangerous spaces and yet also open spaces for women.

The peace agreement of 2005 opened such space for our work. The government had to show that they were moving towards peace and so we took advantage of that. We were able to approach the media, do radio programs, write articles, go to schools and universities to work with students. We talked about domestic violence and laws that discriminate against women.

During the war, the weapon of choice was rape. We used that [reality] to take a look at laws that related to sexual violence. Sexual violence was called a private/public issue.  At first, we did not know how to talk about this. We lacked experience. So, we built alliances with organizations and women outside Sudan. We built alliances with organizations with different expertise – media, advocacy, research, training, law – but all with an interest in sexual violence. We needed to change the law in Sudan that saw women who experienced rape being charged with adultery. We went to Pakistan and heard from the women of Pakistan about how they went on to change a similar law there.

Sometimes when you are in a very controlled situation you need to know how to work differently. You always have to think about what you want to achieve.

Can you talk about working in both an authoritarian regime and one that condones patriarchal violence? How were you able to achieve your goals?

It is very tiring. Sometimes you feel burnt out. It’s tiring to always have to think about if and how to do something because everything that you think you can do might actually jeopardize the women you work with or your organization. How do you sustain and maintain your very existence while at the same time change the patriarchal views?  Change the patriarchal rules that are thrust upon you? Change the fabric of the social system? How do you change social norms when the government has all the tools – media, the laws – to put out ideas that degrade women?

For example, the issue of rape in conflict helped in our work with peace. The word “peace”, for example — even saying it meant that you could be arrested. So, it affected your personal life, your work life. We had to make a choice about how to work. If I went to meetings in Geneva, for example, I could be arrested at the airport when I got back. So, we worked with allies who could lobby for us, who could work for us at the international level. Through the networking at the regional and international level, we were able to raise issues there. And the government felt the international pressure to change the laws.

I want to say one more thing about patriarchy. Patriarchy is actually the philosophy of the whole system. It was something we had to deal with on a personal level. I do not want to wear a hijab if I am forced to wear one. They want you to be humble and afraid. We have to challenge both patriarchy in society and the patriarchy of the state.

What is the value of international support for Sudanese activists?

Without international pressure and support, we could not do our work. We would have to keep quiet. When four of our partners closed down, we had to keep quiet at the level of our public work. People were being arrested. The government was trying to make us afraid.  Our own office was closed. But we continued to work with other organizations and, a few months after our office was closed, the laws were changed.