“I believe that we could get closer to creating peace through reunification when we move in that direction, but we also need women to give their voice for peace.” 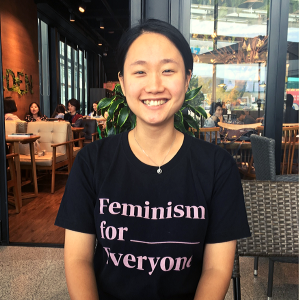 Since 1950, the two Koreas have been locked in a perpetual state of war. In 1953, an armistice was signed, but a peace agreement never followed, leaving the peninsula divided.

“Under the reality of a Korea that is divided into North and South, women in South Korea feel that threat to their safety in their daily lives,” said Heejin, referring to the fact that another armed conflict could break out at any time.

It’s been an uphill struggle for feminists in South Korea. According to the 2018 Global Gender Gap report, South Korea ranks well below the global average with major disparities in terms of wage equality and earned income for women. Following the emergence of #MeToo scandals across the country, 10,000 Korean women rallied to demand an end to spy cameras, dubbed #mylifeisnotyourporn. Unfortunately, this activism has been met with mixed reactions. According to the Korean Women’s Development Institute, South Korea’s young men are more opposed to feminism than older generations.

In North Korea, women face a different struggle. Economic sanctions – a direct result of the unresolved conflict — are disproportionately affecting women and children. It is estimated that in 2018, approximately 3,988 people — 72 pregnant women and 3,193 children — died from sanctions related delays in delivering UN humanitarian programs.

These dire statistics, in both North and South Korea, aren’t stopping Heejin as she works for peace. In fact, Heejin believes that feminism and peace on the Korean peninsula cannot be separated.

And Heejin wants younger Korean feminists to see how women are integral to building peace. “While women of South Korea, especially young feminists, are talking and discussing women’s rights, talking about peace is not happening as much,” she said.

Heejin is a member of the Korean Women’s Movement for Peace, one of four organizations that make up Korea Peace Now! Women Mobilizing to End the War — a women-led global campaign working toward a Korea peace agreement. Her work focuses on educating and empowering young women by amplifying their voices to advocate for peace, gender, equality, and a world without war.

In South Korea, the Korea Peace Now! campaign joined Heejin and other members of the Korean Women’s Movement for Peace for a Q&A session with feminist icon, Gloria Steinem. She had this to say:

“[Women] have a different model of leadership. It’s not about dominating, it’s about including… This means that [when] women [are] at the peace table…peace agreements are way more likely to be completed and way more likely to last.”

The Korea Peace Now! campaign recently commissioned a report titled The Human Costs and Gendered Impact of Sanctions. You can download it here.