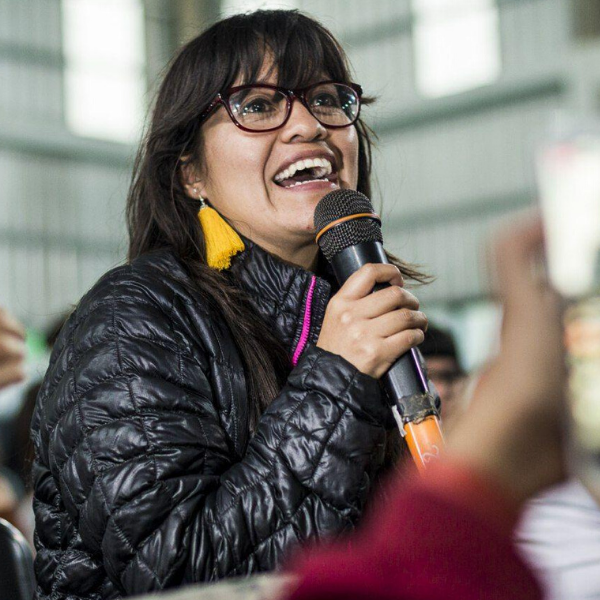 “It was, honestly, through practicing journalism that a door opened for me and I started to discover the power of words.”​

Lucía Ixchíu is a Mayan Indigenous K’iche woman, a cultural promoter, journalist and feminist. She is one of the co-founders of the Festivales Solidarios (Solidarity Festivals) collective. The collective works on issues related Indigenous rights, defense of the land, the environment, and the preservation of historical memory through art, culture and public events.

What motivated you to become an activist? Was there a particular moment that was decisive for you, or was it an accumulation of experiences?

Ever since I was 13 years old, I’ve been a cultural promoter organizing rock concerts with my sister and involved in various cultural activities. But, I can definitely say that there were two important moments in my life [motivating me to become an activist].

The first: when I met Yolanda Colom, a woman guerrilla [fighter] and who shared with me books by Mario Payeras. The books teach the importance of art, struggle and protest as a form of expression, and of the importance of bringing struggles together.

And the second moment, which is perhaps the most critical and impactful, was the October 4, 2012 massacre on the “Summit of Alaska”. The Guatemalan army killed seven people who were protesting a hike to electricity rates and speaking out against changes the president wanted to make to the constitution.

Many media outlets were completely racist in their coverage of the massacre. So I decided, as an Indigenous woman, to tell my own history. Two weeks after the massacre, I became a journalist.

I had lived through an event that completely changed my life. And our student group at San Carlo University protested against the massacre with a performance in front of the government palace – tossing red paint inside and outside of the palace. Because of this, the government of Otto Pérez Molina treated us like criminals. They persecuted five members of the student group.

Was this when you started to write about criminalization?

When I became a journalist, with the independent media, I started to cover the resistance and the defense of land. And I have to say, writing scared me because, in my eyes, I was simply an Indigenous woman who didn’t have a voice, who didn’t have any academic or professional recognition. It was, honestly, through practicing journalism that a door opened for me and I started to discover the power of words.

When we saw our peers criminalized and convicted, we thought, ‘What can we do to support them?’

You said that you were scared when you started to write and do journalism. Why was that?

I think that since colonial times, Indigenous people have been treated like animals, and something of this colonial inheritance has permeated our self-esteem. Inheriting this low self-esteem, as an Indigenous woman, I felt shame and fear of writing because I felt my voice didn’t have value.

I was moved by indignation and racism. I was enraged by the massacre of October 4th. It left me with an anger that had accumulated over the past 500 years. This anger and pain helped me lose my fear of and shame about writing. So, indignation and anger were transformative tools.

How did you make the shift from journalism to cultural mobilization?

I’d been organizing poetry readings and concerts for a long time. When I decided to make a shift in my life and become an activist and a journalist, immediately the cultural life that I grew up with came along with me. It [cultural mobilization] also became a tool of transformation, a tool to denounce, and as the years passed, I started to see art as way to colonize thoughts and actions.

Today, you’re working on themes that are diverse, but connected, such as Indigenous rights, the defense of land and the environment, and historical memory. How do you connect these themes through your work?

The thread connecting everything is criminalization. When we started to work on criminalization through the Festivales Solidarios and art, we started to ask, ‘But why are all these people imprisoned?’ And we understood that it was because they were defending their land and talking about human rights and Indigenous people. So, we decided it was important to work on those themes as well. And that brought us to work on historical memory, to tackle and understand the history of a country that has lived through 36 years of war. As a result of the war, and of the colonial history of this country, everything is connected. There is no fight or struggle here that is capricious…No, these are all concrete actions that are the result of historical, social, and political processes related to the history of inequality and racism that exists in this country.

Note: This is a translated and edited version of an interview that was conducted in Spanish.