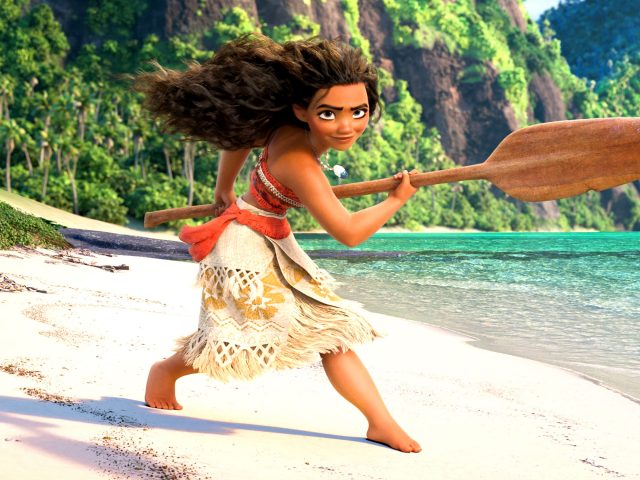 There was a time when the idea of a Disney Princess would create an image of a beautiful girl, dressed in a sparkling gown, waiting for her Prince Charming to come and take her away from all the chaos to live happily ever after in our mind. But those days are gone! In recent years, Disney has portrayed the main female protagonist of their movies beyond traditional fairytale references. Believing in self-worth, we have seen Elsa, Merida, or Mulan accomplishing their goals in a more progressive manner. But Moana from the animation film Moana (2016) is different from all others in the sense that she represents a vast majority of young people having great potential. She is not only a brave teenager but also a true leader who can inspire millions of female viewers in an unapologetic way.

Moana is a 16-year-old daughter of the Chief Tui of Motunui, a Polynesian island who soon takes over the leadership from her father as a successor. From a very early age, she enjoys hearing stories of monsters from her grandmother Tala, popularly known as a crazy woman. The ocean always attracts her although her over-protective father does not let her cross the reef line due to past events and danger. Soon ecological disaster puts the inhabitants of the island in a risky situation. Moana, like most other Disney Princesses, heads out to save her people. But her journey is definitely unique and more inspiring than any other. She sails across the sea without any prior knowledge of how to sail a boat. The only thing that keeps her mind in focus is that the ocean has chosen her. Along with a brainless roaster Hei Hei, she goes out to find demigod Maui to restore the stolen heart of the ocean, Te Fiti, and save her island.

Moana is curious and genuine. There comes a time when Moana could place the stone on top and take her responsibilities. But she is eager to know her root and wants to explore more, which shows her selflessness. She doesn’t like to be called a princess. When Moana learns about her ancestors that they were voyagers, she immediately decides to take their legacy forward with her leadership and courage. She believes in herself and does not like to rely on others’ help. When Maui tells her that sailing is not her thing to learn, she proves him wrong through her self-determination.

Moana is an intelligent girl who uses logic more than magic unlike most other Disney Princesses. She defeats the giant coconut crab with her witty ideas and gets the magic bait of Maui. When the Goddess of Fire and Lava blocks her way to Te Fiti, she uses her wisdom to deceive her eyes. She also motivates others with her insights. When Maui disagrees to help her in restoring the heart, she makes him believe in himself. When he breaks a part of his magic bait, it is Moana who shows him his worth that he is still powerful without his bait. She fights all the coconut pirates fearlessly proving Maui’s doubts over her ability wrong. She is fearless and confident. She decides to take her journey alone when Maui leaves her alone in the middle of the ocean. She finally succeeds in restoring the heart of Te Fiti and saves her little island from an evil curse.

What makes Moana different from other Disney Princesses is the fact that she is not romantically attached to anyone. Even Maui, who helped her sail on the sea and achieve her goal, is like a friend to her. They laugh, make each other comfortable but that’s because they recognize each other as a friend, not lovers. The absence of a love-filled storyline doesn’t fade the charm of the movie. In fact it makes it more realistic and inspiring for the young generation. It delivers the message that a girl can achieve her goals without a Prince or lover. When almost every Disney movie represents eye-catching royal castles and grandiose weddings, Moana depicts the life and culture of a Polynesian island with its music and songs.

Moana is a true leader. She knows how to take risks and responsibilities well. At the beginning of the movie, it is shown that Moana comes up with clever solutions to any problem approached by her people. She breaks the rules and goes against her father only when she knows that there’s something big she has to do for her clan. Once when she almost gave up, her inner soul encouraged her to move forward. Even in front of a demigod Maui, she proved herself to be an independent and brave leader who is mentally stronger than him. She does what even a strong man fears to do. Maui several times questioned Moana’s worth. He even called her “buttercup” and “chicken” to shake her confidence. But Moana is tough and ready to answer all the criticism with immense confidence.

Disney Princesses are followed and adored by kids and teenagers all across the globe. Any movie or character leaves a long-lasting impression. When  Princess Cinderella or Aurora devotes their life to a Prince charming, Moana teaches us the importance of self-determination. She proves that a girl can take the journey alone towards her goal. She shows us that there may not be any Prince charming to save a girl from danger. But it doesn’t stop a girl from dreaming or achieving her worth. All she needs is believing in her choice and making her journey brave enough to reach the destination. In short, Moana is a special movie that is equally suitable for kids and teenagers.