“When a girl looks at a boy,

And the boy looks back at the girl,

A baby begins to grow inside her.

(Conversation between Zainab and her friend, Dukhtar(2014)). 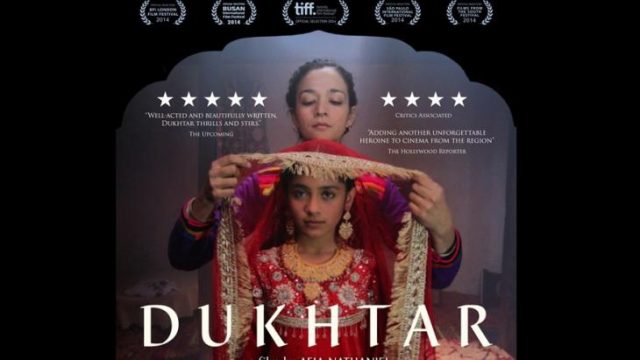 The innocence of the girls is endearing and yet heartbreaking. Unfortunately, child marriage is still widely prevalent in South Asia. And while a young girl who does not even understand what it means to be a mother, let alone receive sex education, is often married off and left to at the mercy of her husband, to whom she belongs after her marriage according to the patriarchal culture. Dukhtar, a Pakistani film directed by Afia Nathaniel draws attention to this topic through the heart-touching story of Allah Rakhi and her daughter Zainab.

The movie revolves around Rakhi and her young daughter Zainab. Rakhi herself was married at the age of 15, and since then she has not been allowed to be in touch with her family. Her life revolves around her daughter Zainab with whom she shares a friendly bond. Young Zainab tries to teach her mother how to read and write, and Rakhi tries to be a friend to her daughter- a friend she perhaps yearned to have when she was young. Rakhi’s husband Daulat Khan fixes Zainab’s marriage with an old tribal leader, Tor Gul who is perhaps old enough to be her grandfather. The marriage is fixed as a symbol of an alliance between rival tribes. Daulat Khan single-handedly decides his daughter’s fate and just informs Rakhi. On the day of the marriage, Rakhi escapes with Zainab, and thus Rakhi’s quest for freedom begins. On the way, they come across a truck driver Sohail who initially refuses to help but later becomes sympathetic towards them and agrees to help them escape. Rakhi’s husband Daulat Khan, brother-in-law Shehbaaz (who also is revealed to be attracted to Rakhi), and Tor Gul want to find Rakhi and Zainab at any cost as they believe Rakhi’s act has diminished their honor. Tor Gul’s men and Shehbaaz set off to hunt for the duo since they can be at peace only after punishing her severely for her audacity.

The director deserves laurels for skillfully depicting these complex issues within the short span of nearly 1 and a half hours. The director’s earnest effort to portray complex issues is indeed praiseworthy and the excellent cinematography adds a magical touch to the story.  The story highlights several issues forced marriages, alliance marriages, child marriage, honor crimes, etc skillfully, through simple yet powerful dialogues.

The movie shows us how women are considered as mere transferable properties. From a historical perspective, alliance marriages have been happening for centuries where the marriage is a symbol of a restored harmony between tribes or communities. The consent of those who get married, especially that of the woman or girl- is rarely taken into account. When Zainab’s father agrees to her marriage to the rival leader Tor Gul, he takes the decision all by himself and just informs his wife so that she can get their daughter ready. And it is not an issue limited within South Asia. I remember how shocked I was after reading Mario Puzo’s “The Family”; a novel about  Pope Alexander VI and his family.  All across the world, women have been historically exploited as pawns in political games.

The movie draws attention to the impact of the lack of sex education on child brides, as we can see in the part I mentioned earlier. Zainab and her friend don’t have any idea what it means to be married. Right before Zainab’s wedding, Rakhi decides to educate her about sex, reminiscing that nobody taught her when she got married. As I quoted at the beginning of the article, the innocence of Zainab and her friend is a heartbreaking reality; young girls who are supposed to go to school and play are often married off to men far older than them who often do not wait until the brides grow up and rape their wives; wives who often zero knowledge about sex. Denial to acknowledge marital rape only paves for these incidents to repeat in patriarchal societies over and over again.

But the dominant theme of the movie is Rakhi’s love for Zainab, and thus the movie is rightfully titled “Dukhtar”- which means daughter. Allah Rakhi doesn’t want her dear daughter to suffer the same fate as hers. And to save her daughter from the perils of the marriage, she is willing to take all the risks to escape.  Rakhi considers that her life ended the day she got married, and she appears to be unhappy in her married life. One may criticize Rakhi’s perception about herself, but we need to understand her context and circumstances, given that Pakistan is among the countries with the highest number of honor killings every year. Women are killed by their family members for acts that are considered to be immodest or damaging to the honor of the family and society. Many times, a woman who has fled from being a victim of honor killing can never return, as in such instances the family or the community never forgives her for whatsoever her crime is. Thus a woman like Rakhi who has probably never gone outside alone ever since she got married not only escapes but travels miles and miles with a stranger whom she only finds on the way only to ensure a life of freedom for her daughter is no less than a Shero.

At the end of the day, the movie is not just about grief and abuse, it is also a tale of love, courage, solidarity, and quest for freedom, beautifully embellished by praiseworthy script, direction, cinematography, and excellent acting. It is about a mother’s love for her child, a daughter’s yearning to see her mother, a woman’s quest for freedom for which she is willing to die if she can’t attain freedom. In a way many of us perhaps can relate to this tale of awakening; after all, so many of us are Sheroes of our life stories and challenged the shackles of society after being silenced or oppressed for a long time.

The writer is working as the editor of the Women Chapter’s English site. She has completed an M.A. in Development Studies from the International Institute of Social Studies, the Hague, the Netherlands.   When she is free, she likes to write, travel, or make quilled art/crafts.