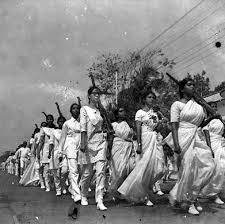 Pamelia Khaled: The 7th March, 1971 is denoted as a historical day for Bangladesh, a speech was given at the Ramna Race Maiden in Dhaka in front of two millions people by  Sheikh Mujibur Rahman, who is known as Bangabandhu, a Bangladeshi Nationalist leader and first President of Bangladesh. The Bangladeshis (the then people of East Pakistan) were inspired to organize for a potential war of independence, amid widespread reports of against armed mobilization by Pakistan (the then West Pakistan). During the speech, Sheik Mujibur Rahman announced, “Our struggle is for our freedom. Our struggle is for our independence” (এবারের সংগ্রাম আমাদের মুক্তির সংগ্রাম, এবারের সংগ্রাম স্বাধীনতার সংগ্রাম).

He also announced the civil announce movement in the province, calling for every house to turn into a fortress. Now after the 4 decades it has become due to search a leader like him for another calling for Bangladeshi people how to remove ignorance about science and its concepts to establish a peaceful multicultural country. It is time to launch another war against the radical groups who are working with a new agenda of killing the people of other faiths, non believers, writers and scientists. To destroy liberal, secular minded Bangladeshis, these fundamentalists are killing Bangladeshi talented youths who believe in change; the writers, the scientists and the intelligentsia who believe in science and free thinking.

Unfortunately, after the 4 decades Bangladeshis are still struggling to uphold their freedom, the freedom of speech and free thinking rights. Now it is time for Bangladesh government to educate her people how to increase tolerance and respect who have different opinions and other believers. There is an urgency of a comprehensive education that includes science and World religions. It is important to unveil the fact of science gradually in front of youth by explaining what is the difference between science and religion. As well as, there is a need to educate youths how to appreciate the value of scientific phenomena as a part of educational process.

However, Bangladesh has been changed in terms of social and political processes since last 4 decades but a few intellectuals, the believers of free thinkers, writers and educationists keep doing their scholarly work to uphold freedom of speech and democracy in the country.

Once Bengalis and other ethnic communities, the people of Bangladeshis were known for liberal mindedness in terms of culture and religion, now this liberal identity is becoming questionable; we are observing constant killing of writers and scientists by the radical group, who have different faith or ethnicity. Thus, this country is becoming a centre of attention for violence in this region recently, it cannot claim anymore, as a peaceful, democratic or secular country. Should we count down of doomsday  and sad of watching the past and current killing of scientists and writers, thinking of  this is an end of secularism and multiculturalism in Bangladesh?

I grew up in a Hindu neighbourhood; out of 10, I had 7 peers, who were Hindus. We were taught by the parents and schools to love our peers without looking at their social and religious identity and be patient and tolerant to other believers. It is vivid in my memory, in 1971, during the dark night of March, to save Hindu neighbours , my philanthropist father stood up in front of  the rifle, which was  pointed by the Al Badars and Rajakars to kill and through them in the Brahmaputra River. They were tied and lined up for shooting because of their religious identity, “Hindu”.

In that very night standing besides his community members, our father taught us we need to be responsible of other peoples’ lives and show our courage even we are in front of rifle. We must try to save ‘life’, ‘people’, not focusing on gender, race, religion or political groups.

However, the Islamic fundamentalists lost conscience and messed up monotheism with atheism, likewise religion with science. In free thinking concept each of the ideas must have equal space to nurture freedom of speech and democracy in the country. This is a different Bangladesh; large numbers of population are living under the veil of ignorance and radical idea. The radicals, who are the hardliners, are winning for the weak governance. These youths are used as weapons equally for the wrong doings by the oppositions and government in many cases.

Breeding ignorance and creating Frankenstein must be stopped by the government and oppositions. To avoid more disasters children must be provided scientific education at school and home. NGOs and other education stack holders could have a few important initiatives by developing social awareness programmes of ‘secular ideas and multiculturalism’ in school and among the communities.  The more we deny of scientific education and non violence movement in politics and consider us we are not lack of knowledge, the more we will be radicalized and racialized; thus, a grim future is waiting ahead of this nation.

The writer is Doctoral student in Curriculum Studies and Teacher Development