When a 17-year old undocumented immigrant in a U.S. detention centre discovered she was pregnant and expressed her wish to terminate the pregnancy, state and federal authorities refused to release her to go to a clinic for the procedure, denying the girl her right to a legal abortion under US law. A legal battle ensued, and in the end an appeals court ordered authorities to allow the procedure, just before the girl reached the 20th week of pregnancy, which is the gestational limit permitted by the state law. 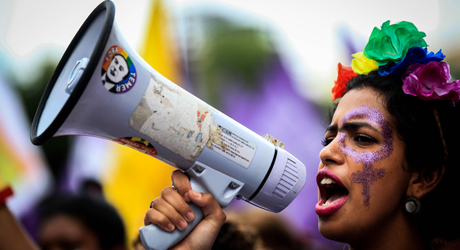 Women’s rights experts have denounced such restrictions on adolescent girls and women to exercise their right to reproductive choices as an especially hurtful form of gender-based discrimination and violence.

“Forcing women and girls to be mothers, or to resort to unsafe abortion, is a form of gender-based violence. It’s violence to force somebody to go through a pregnancy, or to do anything with her body that she doesn’t want to do,” says Carmen Barroso, co-chair of the Independent Accountability Panel (IAP) , appointed by the UN Secretary-General in 2015 to monitor implementation of the 2016-2030 Global Strategy for Women’s, Children’s and Adolescents’ Health.

Complications in pregnancy are the leading cause of death among girls aged 15 to 19 years old, according to a recent IAP report. Unsafe abortion is a major contributor to adolescent mortality in countries where restrictive legislation limits access to safe termination of pregnancy, the report found.

“All statistics show that adolescent girls, no matter how rich or poor, are much less empowered than adult women to exercise their reproductive rights,” Barroso said at a recent high-level panel discussion in Geneva organized by the UN Human Rights Office’s Committee on the Elimination of Discrimination against Women (CEDAW). Teen pregnancy, she added, placed a large economic toll on society by limiting young women’s access to jobs and education, resulting in substantial losses in a nation’s productivity.

“We have enough laws on the books, but violence against women and girls is still one of the gravest and the most reprehensible form of violence – and yet the most enduring, the most remarkably resistant to change,” Gilmore said. “We shouldn’t require a #MeToo campaign to be reminded just how pervasive gender-based violence is.”

Barroso stressed the urgent need to promote General Recommendation No. 35 adopted earlier this year by CEDAW as a tool for States to tackle impunity and lack of accountability for gender-based discrimination and violence.

“The expansion of the understanding of violence to include violation of sexual and reproductive health and rights is fundamental,” said Barroso.
She noted the particular vulnerability of adolescent girls and the critical need for legislation to address explicitly adolescents’ specific circumstances. “It’s in adolescence that girls become prime targets of gender-based violence, with devastating lifelong consequences, “Barroso said. “Policy frameworks tend to be ‘adolescent-blind’ and this is also the case when it comes to gender-based violence.”

She urged Member States to take into account the particular needs and vulnerabilities of adolescents when integrating General Recommendation No. 35 into legislation, policies and budgets.