Whenever a rape incident happens, we tend to put aside the rapists and focus on different topics, often implying that rapists have done it under certain circumstances. What could be the circumstances?

Influence of drugs is stated as a reason!

The lack of moral and religious education is pointed out!

Recently, the lack of brothels has been discussed!

Some have said, it is important to ban porn-sites from the internet.

TWO. The question of drugs is not relevant. Because it can be seen that most of the rapists are not drug-addicted. Some of the rapists might take drugs. It cannot be said that, if he does not take drugs, he will not rape. As in spite of not consuming drugs, many have raped and killed people. I have never heard a teacher of madrasah taking drugs, but some of them have always been in the role of rapists.

THREE. I do not think there is a lack of moral education. Every rapist knows that it is not right to rape. They at least do have that kind of moral education. At least when the university teachers or students rape, how do I tell no one taught them morality? Have they directly come to human society from the jungle? When a madrasah teacher rape, how do I tell they have less religious education than me?

FOUR. I do not think there will not be too much rape if there are brothels everywhere. What is the benefit of the brothel for a person who rapes a child from six months to ten years? Will a Madrasah teacher go to a brothel? Those who do not leave boys, girls, elderly, not even animals, what benefit brothel is for him? Moreover, there are also cases of rape in the city where there is a recognized brothel.

Therefore, it is no use to say about these situations by avoiding rapists. Rapists are criminal. There is no reason to cover his crime. The mentality of covering up the crimes need to be eliminated. The days of saying the man stole because there was no lock in the door is gone. The rapist should be questioned about why did he rape?

We all want to punish the rapist.  But if all the crimes are not punished in society, then it is wrong to think that it will be punished only because of rape. Where the murder, bribery, fraud, loan fraud, drug dealer, the kidnappers are not being punished properly, why the rapist would be punished here?

Do we know about how lakhs of cases are pending? Society is now in the top of being recidivist, the patron of crime. If the entire society has not been changed from the root, why will the morale of the rapist wake up alone, and why would a policeman stop taking a bribe?

Link to the original article in Bengali: https://womenchapter.com/views/31259 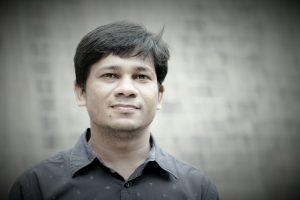 Mojaffor Hossain is a fiction writer and literary critic from Bangladesh. Starting his career as a journalist and now working as a translator in the Bangla Academy, he has been connected with the literary world indispensably for 14 years now. He has published five books packed with awe-inspiring short-stories, which, in recent years, have attracted much acclaim from both general readers and literary critics. His signature style is using native realities as his settings and giving them magic-realistic or surrealistic colors. He has been awarded four times for his short stories. He is also known as a translator, literary critic, and feminist thinker.

The articles reflect the personal/political views of the writers.