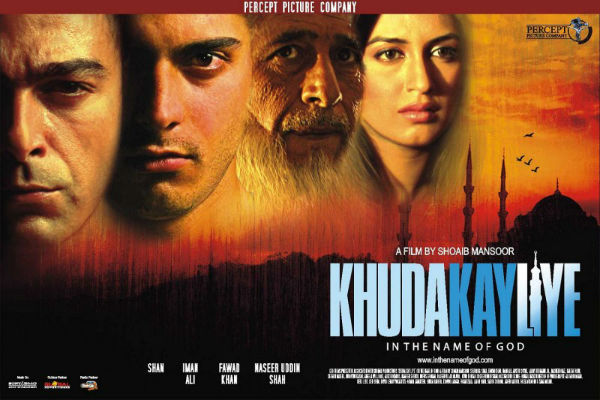 I love it when cinema brings out contemporary social issues and presents a thought-provoking performance for the audience. Bringing out sensitive feminist concerns takes a lot of courage, especially when the industry is from a strict cultural setting. Pakistan is known to exercise extreme religious beliefs and gender stereotypes, so it is quite risky to make a movie based on the outcomes of religious fundamentalism and women’s subjugation in Pakistan. It is indeed more striking that such a movie named Khuda Kay Liye was released back in 2007 when terrorism, 9/11, Islamophobia, and women’s role in Islam were the hot topics for analysts as well as for normal people. Without a surprise, this movie created a storm not only in Pakistan but also on international platforms. The film sends out a strong message and challenges religious orthodoxy in Pakistan. It is no shock that the movie was banned in many cities across Pakistan after its release. Although Khuda Kay Liye covers many important issues, today I will only talk about how it highlights women’s position from different religious and cultural environments.

The movie is based on two households- one in Pakistan and another in the UK. Two brothers Samrad (Fawad Khan) and Mansoor (Shaan) are raised in a liberal Muslim family who are interested in music. On the other hand, Mary or Mariam (Iman Ali) is a British-Pakistani girl born in the UK and raised by a strict father in terms of religion. The character of Mary’s father represents a toxic character that is heavily prejudiced against Muslim women’s position in Islam. The funny thing is he maintains a live-in relationship with a British woman and he has been changing partners after the demise of his first wife. He sees no problem when a Muslim man is engaging in outside-religion and illegal relationships. However, when it comes to a girl, the scenario is different. Mary falls in love with a British boy, Dave and they two want to spend their life together. When Mary’s father finds this out, he plans something tricky to stop his daughter’s relationship with a man outside their community. He promises Mary that he would accept Dave and that he wants Mary to accompany him on his visit to Pakistan. Mary falls into the trap and goes to Pakistan. In Pakistan, they stay in Mary’s uncle’s house, the elder brother of Mary’s father who is very different from his brother in terms of religious and cultural views. Mary’s father wants her to get married to Mansoor, Mary’s cousin. But Mansoor disagrees to be such a deceiver. On the other hand, Samrad, another cousin of Mary is brainwashed by Islamic fanatic Maulana Tahiri. Tahiri makes him believe that music is haram (forbidden) in Islam. The young man who used to be culturally versatile stops doing music and devotes himself to Islam in the extremist forms.

When Mansoor rejects to marry Mary, Mary’s father manipulates Samrad to marry her instead. They take Mary to a place somewhere near the Afghanistan-Pakistan border. There she is forced to marry Samrad without any valid consent. At this point of the movie, full hatred is felt against the characters of Mary’s father and Samrad. Mary helplessly remains confined there. Samrad later catches her once while fleeing and consummates their marriage by force. Mary becomes pregnant and gives birth to a baby. The story focuses on so many other issues in the latter half, and at one point, Mary is rescued by Samrad’s father with the help of the British Government’s intervention.

Mary’s fortune and the way she was treated by her father and husband, sum up how girls are being victims of discrimination, forced marriage, and marital rape in a misguided Islamic society. Mary’s freedom was snatched by her father when he refused to agree to her life decisions and imposed his own on her. He feared that marrying off her daughter to a British man will destroy his reputation in the Pakistani community living in Britain. But as he is a man, it is accepted in his case to maintain a live-in relationship without a woman outside his religion. Moreover, this movie shows that at the Pakistan-Afghanistan border, women are kept poorly by men. They fear those men and when Mary was brought there by her father, they did not help her out of fear. It verifies that those women have already accepted their oppressed life and normalized oppression by remaining quiet. This behavior is passed on from one generation to another and women fail to break the cycle of oppression as they choose not to go for the rebel. The gender discrimination and power exercise are very clear here.

This movie brilliantly portrays the forced marriage culture that exists among many communities. Mary’s father is a hypocrite. She was forced by her father and Samrad during the marriage ceremony. Is not a marriage where the girl gives no consent illegal? Marriage is an institution where two people share their happiness and sorrow and where the presence of love and mutual respect is mandatory. Mary was never happy in her marriage. She was brutally forced into a sexual relationship with Samrad which is called marital rape by definition. Samrad was made to believe that he was doing a favor to Mary and upholding the Islamic value by marrying her. Samrad, not for a moment, understood rationally.

The little but most important cameo of Bollywood actor Nasiruddin Shah explains the zest of the movie nicely. He comments that there are no flaws in Islam. Rather the flaws are in us, who mislead fellow Muslims by misquoting and making false ideas about Islam. Samrad was brainwashed by such a radical maulana. His treatment of Mary does not reflect the teachings of Islam. Rather it shows how radical and Islamic fundamentalism destroy the beauty and essence of Islam by creating conflict in society.

Khuda Kay Liye has a brilliant script. The acting of side actors was not top-notch but the story does send out a strong message to all the anarchists. This is a must-watch movie, especially for all the ladies and young gentlemen out there.