“All through school, college and university I have had to face this. I couldn’t walk in the street. People would point at me and say, ‘That’s the girl.’…”- Purnima Shil[1] 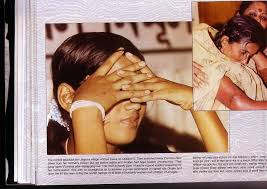 Shucheesmita Simonti: Purnima was only 13 when she was gang-raped in 2001 when atrocities against Hindu minorities broke out across Bangladesh; as it does from time to time. Many people escaped to India at that point in time. Purnima’s family didn’t. She was raped because she was a religious minority. Even at present, she is living in Bangladesh but now she really wishes to move out.

Even after 15 years of the incident, society does not let her forget what happened to her. She is looked down upon by people. But why she has to pay the price for being raped? Being raped by some lowly creatures is not a crime, but being a rapist is! As Purnima boldly states in the interview, “This is not my shame. This is the shame of the Bangladeshi society.”

I don’t know Purnima personally. I have never met her. But when the incident happened to her, I remember reading about it in a newspaper. I was only 10 years old at that time; I didn’t understand what rape meant exactly. But what I understood was that it was the worst thing that could happen to a girl after which she dies. Where did I get this idea from?

Well, thanks to movies and serials, mostly what I saw was that the rape victims commit suicide and release their families from the unbearable shame they apparently inflicted upon their families! Outrageous, isn’t it? But this is the image that was projected on my young mind about rape victims through media. The Bollywood movie, ‘Raja Ki Aayegi Baraat’ for instance, and many other movies for that matter, taught me that a girl can live happily ever after by marrying her rapist. And I can’t stop counting the number of movies I watched where a rape survivor puts everything in order by killing herself.

As I grew up, I came across stories of rape survivors who continue to live with their heads held high. But what is heartbreaking is the trauma inflicted upon them in our part of the world; perhaps this is true in the case of many communities across the world. The society just cannot accept that how a girl who has been ‘raped’ continues to live and possess ambitions. She is treated as untouchable as if she has an infectious disease! She is not supposed to have any self-respect; nobody is supposed to marry her. The society does not miss out on a single opportunity to ridicule a rape survivor. She is taught that it was her crime that she was raped. Often the rape survivors from conservative societies find it difficult to survive peacefully.

I personally know the case of one girl who fell deeply in love with a guy who said he didn’t have any problem with the fact that she was a rape survivor.. She was deliriously happy as she could never imagine that somebody would accept her despite knowing her past. However, little did she know at that point of time that another disaster was on the way. Her new lover only lied to her about his feelings to exploit her sexually and dumped her thereafter.

And his last lines were “Why would I even marry someone like you?”……… Even after a decade of being raped, the memories were still haunting her, following her like a shadow everywhere she went.  On top of all the sufferings she endured along the journey to healing, this guy ravaged her soul once again. He is not the only opportunist moron; there are many like him who gain sadistic pleasure by committing such heinous crimes. They think it is justifiable to sleep with girls as ‘impure’ like her!

We want to pity the rape survivors or to ridicule them. We want to see them as ‘victims’, not as brave ‘survivors’ who have risen against the odds. We do not want to see them happy, we want them to live in misery. And it is for this reason that the problem lies in our patriarchal, conservative, misogynist mindsets and not with those who have experienced the trauma of rape.

We should really be ashamed of ourselves and our failings as a collective. In public spheres, we condone rape but do not respect rape survivors. We intrude into their lives in every way possible and do not let them live in peace. We point them out and try to make them feel ashamed instead of respecting them for their courage. It is no easy feat to overcome the trauma of rape, but we fail to appreciate their courage and interpret it as arrogance. We consider them as pitiable human beings whose honor has been reduced by what was done to them against their wish. We feed their minds with insecurity and feelings of isolation. But why they are treated this way? It is not their shame; the shame is ours.

The article was originally published on November 12, 2016 in Women Chapter main site.

It has been translated into Persian. Here is the link: