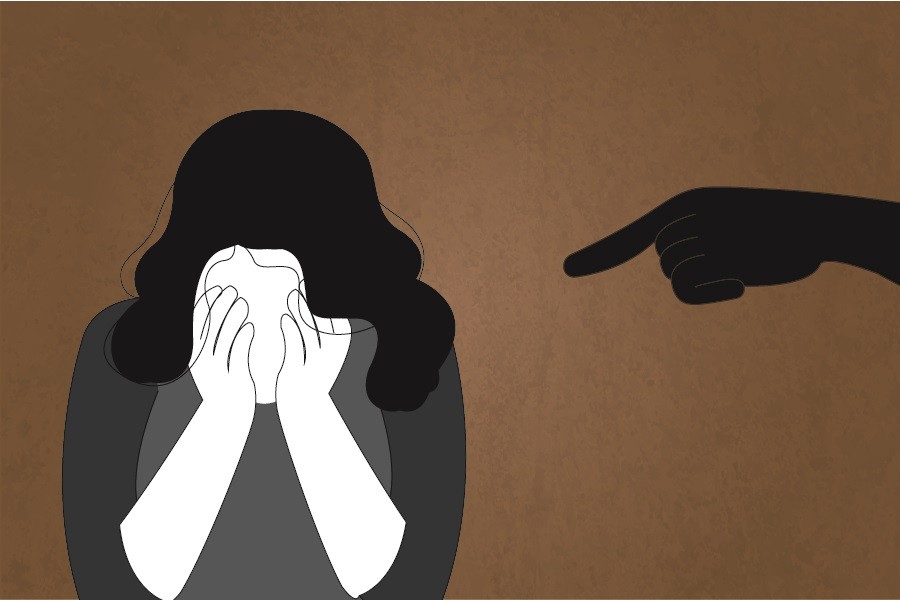 “Oh! She belongs to the film industry? Must be her fault then”.. “Look at her dressing style! She is provocative enough to get raped!”.. “No good girl stays outside home after dusk. She is the one to be blamed” these are plain comments to many people but each sentence is a part of the victim-blaming culture. This good girl vs bad girl definition is socially constructed. And those who contribute to such construction are the ones lacking empathy and enough education to view women’s liberation as a progressive movement.

In recent times, the culture of victim-blaming has seen an alarming rise in Bangladesh. The practice of blaming the victim entirely or partially rather than the perpetrator for the offense of rape is popularly known as the victim-blaming culture. Although the culture of victim-blaming existed throughout the recorded history, it changed its pattern from time to time and place to place. This practice is more associated with particular crimes, such as sexual harassment or rape.

Crimes like sexual harassment or rape is already a very sensitive issue. The practice of victim-blaming adds more sensitivity to the problem. In a patriarchal society like ours, sexual harassment, rape, or victim-blaming attitudes go hand in hand. Society, its people, and institutions are responsible for the act of victim-blaming. And it is no wonder that the women are the worst sufferers in this case. When any case of sexual harassment or rape incident gets media attention, the first thing people do is find out every detail of the victim and make them public. We have seen in the recent suicide case of Munia how her background got focused and the alleged person responsible for her death hardly got any media attention. The same thing happened in the Pori Moni case. Although both these cases are under investigation at the moment, we cannot deny that these cases produced victim-blaming culture both on offline and online platforms. The concern is in what people think about sexual harassment or rape victims. If we look deeper into such a victim-blaming attitude, we find the patriarchal mindset and rape myth acceptance central to it.

There is a belief significant in our society that males are dominant and females are subordinates. This idea allows men to exert power on females and society has already normalized this behavior. So, when anything bad (harassment or rape) happens to a woman, it is considered that the woman must have done something provocative to lure the man. Another belief that men tend to be aggressive in sexual activities and that their sexual desires are hard to control further shape the victim-blaming attitude. According to this, rape or sexual harassment is an act of uncontrollable sexual urge of the males. So, they never question the behavior of a harasser or a rapist. Rather they believe that the victim is responsible for not acting properly. On the other hand, females are expected to be naive and gentle in nature. When a female faces harassment or rape, most people believe that she must have not maintained so-called good behavior. Thus, the blame is directed towards the victims only.

Victims of sexual harassment or rape are portrayed inappropriately by the media. If I ask how many of you remember the face of Tonu or Nusrat who were brutally murdered by rape? I’m sure everyone can remember Tonu’s photo wearing a yellow hijab or Nusrat wearing a brownish hijab. You can recall them because our media continuously published and is publishing their photos in both print and electronic versions. News coverage focuses on the victim’s personal life, past incidents, and family life which have nothing to do with the incident. However, they rarely bring out the perpetrators’ background history. Our media shamelessly publish victim’s photo and their camera is always searching for the victim to be filmed ignoring the dignity of the victim. Again, the perpetrators face is hardly revealed. All these things build a negative image of the victim and the audience criticizes the victim because of misrepresentation by the media.

Nowadays, social media has become a platform where victim-blaming culture takes a new turn. Technological advancement has allowed people to judge anyone and post anything they like without thinking about the consequences. In recent cases, we have seen how derogatory remarks were made about Munia or Pori Moni even before the public knew anything about the cases. We still don’t know what happened to Munia or Pori Moni but we do know that their outfit, profession, or life choices should not be used as excuses to defend sexual harassment or rape. As soon as that news started coming, a group of Internet users started making memes with victim-blaming captions which inspired millions more to point their fingers at the victim’s lifestyle or choice. It is easy for them because they know that it will not create any trouble for them. The anonymous feature of the internet facilitates such behavior by hiding the original identity of the user. This could not have been done in a real-life situation. Moreover, like-minded people support this victim-blaming culture in the online space by supporting those memes, posts, comments with the help of the share and reaction buttons. When anyone sees that he is supported by many others, it provides him the confidence to repeat such actions.

Victim-blaming culture cannot be demolished overnight. It requires collective response and efforts to fight the root causes of this problem. Few recommendations in this regard may involve the enactment of proper laws to monitor victim-blaming attitudes in public settings, media, or social media. Sex education which is a taboo in our society is important for providing logical explanations of biological factors associated with sexual activity as most of the teenagers here misunderstand these concepts because of existing prejudices. The media should play an active role in campaigning against victim-blaming culture. Last but not the least, family is the place from where we learn things and behaviors. Every household should raise kids carefully and teach them the importance of speaking up about victim-blaming culture and ensure a better environment for all the girls out there.