For centuries, women have made important contributions to the sciences, but in many cases, it took far too long for their discoveries to be recognized — if they were acknowledged at all. And too often, books and academic courses that explore the history of science neglect the remarkable, groundbreaking women who changed the world. In fact, it’s a rare person, child or adult, who can name more than two or three female scientists from history — and, even in those instances, the same few names are usually mentioned time and again.

Now is time to change that! 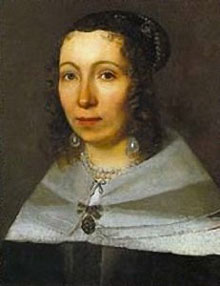 Before German-born naturalist and scientific illustrator Maria Merian began to study the life cycle of butterflies, most people believed that they were “born of mud,” spontaneously generated out of the earth. Her interest in insects was unusual; they were considered “vile and disgusting” and hardly worth study. She was also one of the first naturalists to observe insects directly, giving her remarkable insights into the way they really lived. Although she emerged as one of the leading entomologists of her day, since she wrote in German and not in Latin, the official language of science at the time, her remarkable discoveries about the metamorphosis of insects were ignored by many scientists. She also raised eyebrows by funding her own, unofficial expedition to Suriname where she described many new insects and plants; a highly unusual venture for a woman of the period to undertake. Even so, her impact on science is undeniable: many of her classifications are still valid today and her exquisite paintings of plants, animals, and insects have been widely admired throughout the centuries. 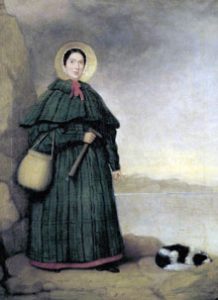 When you say the tongue-twister “she sells seashells by the seashore,” you’re actually paying homage to this English fossil hunter! Mary Anning began searching for fossils on the cliffs of Dorset, England, as a means for extra income, but at the age of 12, she made several discoveries that would rock the scientific world: the first known ichthyosaur fossil and the first two plesiosaur skeletons. Throughout her life, she made many observations that led to revolutionary new understanding of prehistoric creatures, but she could never participate in a full scientific life because of her gender.  She was ineligible to join the Geological Society of London, although her discoveries were critical to driving scientific inquiry into new explanations for natural history and set the stage for Charles Darwin’s articulation of the theory of evolution a generation later. It was not until many years after her death that her influence was recognized. In 2010, the Royal Society named her one of the top ten British women in the history of science. 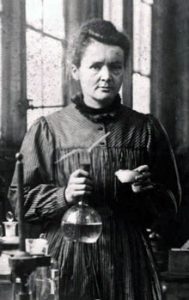 As the first woman in history to win a Nobel Prize — and the only person to win two Nobel Prizes in two different disciplines (chemistry and physics) — Polish-French physicist and chemist Maria Skłodowska Curie is one of the first names that comes to mind when thinking of women in science. When she and her husband Pierre Curie discovered radioactivity, it changed the way people saw the world forever: suddenly, it appeared that energy could appear as if by magic. She also discovered two elements, polonium and radium, and the element curium is named in her honor. The world’s first studies into the treatment of tumors took place under her direction and she founded the Curie Institutes in Paris and Warsaw, which to this day are leading medical research centers. Beyond her incredible individual contributions, Marie Curie has also left another enduring legacy — she has inspired generations of women to pursue their own dreams of scientific exploration and discovery. 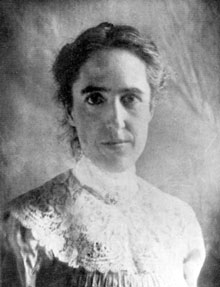 Today, a computer is a machine, but in Henrietta Leavitt’s day, the term referred to a group of female astronomers who had been hired by Harvard to analyze data from their observatory. Edward Charles Pickering, who hired Leavitt, assigned her to look at variable stars: these stars brightened and dimmed at predictable intervals. Using the data provided to her, Leavitt identified and classified over 2,400 of these stars — and discovered that there was a relationship between the period and the luminosity of a particular type of variable stars, the Cepheids. This discovery changed the way astronomers saw the universe: not only did it allow scientists to measure the distance to remote galaxies, but it also paved the way for a new understanding of the structure and scale of the universe.

Reproduced from an article written by Ms. Katherine Handcock for A Mighty Girl.