When I’m writing this, the western sky has already turned into crimson red at the time of twilight. Tuntun is playing with his favorite Lego Dublo train while his mixtape is playing “Shadher Lau” on a loop, his Nunnun (my mom) is face-timing with his Mama (my sister) and his Nana (my dad) is getting ready for his evening prayers. The scenario is never the same during the office days. The last rays of the setting sun usually gleam on my face while I am gliding down the Moghbazar flyover on my way back home with Abbu. During office days, Maa usually remains busy with prepping Tuntun’s meal at this hour. When I reach home from the office and press the doorbell, Tuntun rushes to the door and greets me with the widest smile he can muster. He loves to demonstrate his somersault skills in front of me for a while and then totters back again to his play zone.

Working-from-home has been the zingy cup of tea that hasn’t been served before. But it’s not as utopic as it sounds. The push notification of Zoom Meeting Link pops over the thumbnail of Baby Shark playing on the mobile phone. The office planner gets buried under the pile of lego bricks. Sometimes, the virtual meeting gets a special guest online sitting on the mother’s lap when the toddler gets bored with his toys and begins to whine. This phenomenon has been the story of every working mom nowadays that has stirred up an old debate again – The working mom vs stay-at-home mom.

I started my postgraduate course when Tuntun was 40 days old. Since I started my classes, I have been entitled to – “The mom who wants to kill his son”, “Greedy Mom”, “Feminazi” and what not! When I joined work, my life has been like a funambulist perpetually walking on a tightrope in front of a huge crowd where these people are not always there to cheer you up, sometimes they just stand by there to pity you, with shouting out an encouraging word or two at times but then again shaking their head with disapproval. When I was a stay-at-home mom, people would feign sympathy at dawats/parties asking why I was ruining my engineering career. And when I joined my work, people would sigh in a voice a notch lower and tell me how selfish I became running after money, how ruthlessly I started turning into a part-time mommy.

The situation is not anything euphoric for a stay-at-home mom either. A stay-at-home mom is scorned for not being financially self-sufficient, for not being able to make a Roti or for not ironing “his” favorite shirt in time. At the same time, she is ridiculed by the assumption that all she does at home is to watch serials on Zee Bangla all day while having her favorite Chutney – empathy hardly finds a way to the mother.

For myriads of years, the gender roles for both men and women have been inscribed in the history of mankind saying that women are born for household chores when men are supposed to be the earning persons. Those who refuse to toe the line of social norms are deemed arrogant. A majority of women are fighting against the old order when some have definitely seen the light at the end of the tunnel. But now, the society has placed the moms in a perpetual tug of war which is colloquially referred to by a cringeworthy, retrograde term – “The Mommy Wars”.

In our country, a woman is constantly judged for the choices she makes after marriage, right from when she should have a baby to whether she should work. As in the case of every social change, there is a lag between actions and attitudes. People are willing to accept the idea of career women at times, but they are not willing to excuse them from their duties. Perhaps, that’s why a working mom shows up with a hunched shoulder when she has to submit her leave application for the sake of her baby. A working mom is found receiving pity from the male co-workers in an office meeting for not being a good mom.

Sometimes, I feel that the term “Working Mother” itself is a misnomer that gives another notion of disgrace for every stay-at-home mom. This excludes every other mother’s effort to their kids. It grows an assumption that a stay-at-home mom doesn’t work minimizing their many efforts. But in reality, any mom with a kid, no matter if she clocks in at the office or stays at home every day to tend to their children’s needs is working all day every day.

It’s necessary for a woman to be financially independent. But whether a mom is struggling to start her career, or just prefers to be a home-maker – we must not judge them. The children don’t want a perfect mom, they want a happy mom. No matter what kind of mom you are, if you raise your children with love, you are doing the best. A mother’s love cannot be quantified by the amount of time you spend with him, rather how you spend the time is more important. The only thing that matters is the effort you put into being a mom. No matter how many taxonomies are created under motherhood, one thing will always be common in them – These women are amazing mothers who love their kids to the moon and back. 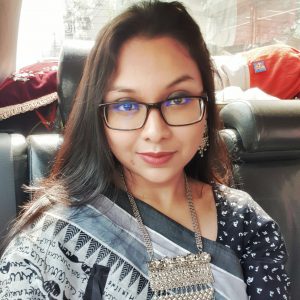 Atiya Anjum Ava is an engineer by profession. She completed her graduation in Electrical and Electronic Engineering from Ahsanullah University of Science & Technology. She is currently working as an Assistant Maintenance Engineer for the Government of the People’s Republic of Bangladesh. Being on a full-time job as an IT professional of the government, she is currently doing her Masters in Information Technology from the Institute of Information Technology, University of Dhaka. Besides her job, she loves to dabble in creative content on Instagram as @the.aboltabol.maa. She is a single mother to a three-year-old toddler and he is the biggest inspiration for her to start blogging. She loves to share her thoughts and opinions on her blog. She blogs about parenting, motherhood, books, feminism, and social issues as  @the.aboltabol.maa