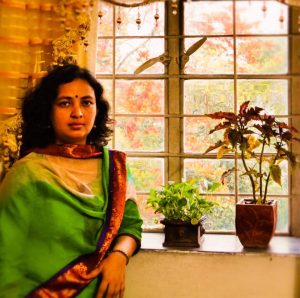 A  young girl was walking on a village road. A river was flowing by the road. The sun was not shining, but the girl was wearing sunglasses. Maybe, she was trying to hide something behind the dark glass. Or, perhaps she wanted to look at the outer world as something dark and mysterious. Or, perhaps, she just put it on as a fashion. She was walking all alone as if in a dream.

It had been raining since morning. The rain was dropping like bubbles on the river water, little boys and girls were having a bath in the river.  Some of them were racing, how fast they could cross the river. A bare-footed boy was going past her, whose whole body was covered with mud and dead wet leaves.  Suddenly the boy jumped into the river. Some water splashed out and soaked the laces of her long dress and her high heel shoes.  Suddenly Mukta woke up from her oblivion whatever was that and became extremely irritated. She didn’t like the soiled water and muddy path through which she had to walk to reach her home which she once left years ago.

Once, five years back, she was part of all these. She used to play in the soaked field, caught fish from the muddy river during summers when the water level became low. At that time, soaked field, muddy path, the flavor of dead leaves didn’t give her uncomfortable feelings ever. But the last five years changed her life. Mukta was a student of a primary school in her village. The school was beside the river and it had a big field. She was happy to go to school more because she got khichuri and beef at the lunchtime than getting lessons. Still, she was doing well in her studies.

One fine morning her mother told her that she had to go to Dhaka for work. Her father had given a word to someone in Dhaka that he would send his daughter, Mukta, to take care of his two children. There was no scope to say anything. Her father had already taken advance of five thousand takas from the person. Mukta left her school, friends, the river, and whatever she had – with tears. She reached in a big city with her father. The house of her master was well decorated; there were lots of showpieces placed in different places. Mukta never saw this type of house earlier. She felt better than she would stay there.

The first thing Mukta liked in the house was a clock. She read something written in the clock, station clock. The clock was hung in the corridor. The most interesting matter of the clock was it could be seen from both sides. When she went to bed after work, the tick-tock sound of the clock gave her comfort as it reminded her of the noise of crickets from her village nights – a continuous, never-tiring noise.

Her pain of leaving relatives was lessened by time. The children were not so naughty. Her mistress always told her to wash her hands before doing anything. She tried to keep herself clean; however, her mistress reminded her every time to wash her hand.

Is it necessary to clean hands every time?

She had no answer. But she had to act according to order. Mukta did not need to be given an order for the second time. Time passed. Mukta became a vital part of the family. She cooked, looked after the children, and maintained the whole house. This part was her favorite. With time she learned how a house could change its look just by a little care. Sometimes she exchanged showpieces and furniture, chose flowers for the vase. Her mistress never said anything.  She knew the taste of the mistress. No dirtiness would be found from her dresses and at the same time, her dresses were attractive. Shampoo replaced soap; she had her personal cosmetics. Her language, dressing style made her a family member of her master. She had already visited Cox’s Bazar and other popular places in Bangladesh. When she went to any wedding party, she went to the neighborhood parlor to set her hair.

For one year Mukta didn’t go to her village. Whenever her mother called her, she told her mother, “Ma, Hiya, and Kabbo have exams next week, they are participating in their cultural events or  Bhaiya and Bhabi will go out of the city, I have to stay with the children.”

Actually her village did not attract her anymore.  Days start in the village in the same way, after the days the nights came, no excitement, no outing, nothing. But no one had any complaint with the monotonous life.  Who would understand her needs!  Her elder sister and her other friends had got married. The way they are living their life also made Mukta suffocated. They wore share in a simple way, did their household work all the time, cooked on mud oven, carried water from pond or river, and washed clothes in the river. They didn’t think about themselves. Here, as Mukta was leading an elegant life, her well dress-up, wearing sunglasses, and heel made a huge difference. As she looked after the house very well, her importance in the family increased day by day to her master. She had her own Tab, where she could watch TV serial or Movie or whatever she wants. When she walked at her housing complex in the evening, she enjoyed teases from young men. She didn’t want to go back where she came from.

One day a young man, Mridul, came to her master’s house. He was working in an NGO.  Mukta, Hiya and Kabbo were watching a movie on TV in the drawing-room, and they were laughing loudly. Mridul was surprised to see that she could speak in Hindi as well as English. Mukta was accustomed to English as she always stayed with Hiya and Kabbo and they used to watch cartoons and English movies. Mridul felt that Mukta could do better in her life if she got chances.

He asked Mukta, “Did you go to school when you were in your village?”

Mukta was shy to answer. But she started to dream of doing office works someday. Who knows, maybe like women in serials in Zee Bangla, one day she will have all the comfort of big house and riches.

However, her mistress could not take Mridul’s offer easily. Mukta had no clue for the reasons behind it.

Her Mistress has already thought that Mukta had become smarter than she was supposed to be. She was very surprised when Mukta could take part in any kind of conversation –political or current issue. Mukta read the newspaper regularly. She felt that Mukta was crossing her limits.

Mukta did not know what her mistress had done, but after this incident, she never saw Mridul. His mobile was switched off. One evening Mukta was entering the house with Hiya and Kabbo. She saw one young girl coming out of the house.

“Who was that barefooted girl, Bhabi? A bad smell was coming from her dress. How could people stayed like this,” she was spraying air freshener and murmuring.

Next night Mukta’s master called her and said: “Your father will come tomorrow to take you.”

“Bhaiya, have I made any mistake? Couldn’t I stay for a few months more?” asked Mukta.

“We are going out of the country for a few months, and we cannot take you with us,” said her mistress.”

Mukta was trying to control her eyes.  But tears started to drop slowly and silently down her cheeks.  She had no energy to argue as was her usual reaction whenever she disliked something. Her pain came out as salty water.

How could she return home? Was it possible for her to stay in the same old village house again?

No, it was not possible for her to lead the same life which she left five years back.  At that time on rainy days, she and her friends used to cover their faces and play hide and seek. It was one of her favorite games. But now she doesn’t even walk bare-foot; she feels uncomfortable. She went to her room and burst into tears. No one could hear the sound of her broken heart. Last few days she was upset regarding her mistress’s attitude, but now she is totally helpless.  Her terrible previous life had devoured her all of a sudden.

Finally, Mukta had reached the village after a long time. Her high heel shoes were covered with mud and she was feeling itchy. There were some soiled spots on her dress. But her family was very happy to see her. She was glowing with her dress and sunglass. No one was thinking about what was going inside her mind.  Her parents had been dreaming for a long time that this was the best time to find a groom for her. No one would dare to reject her. Farwell tears on her daughter’s wedding will be happy tears, thought her mother.

But what was Mukta’s condition? Was she ok here? There was no soap in the toilet, she needed to pump for water, no one had tea in the evening, there is no concept of snacks, and they had their dinner by eight pm. There was a small television in her father’s room. Most of them watched the Zee Bangla serial. Whereas she was used to watching Hindi channels on her own Tab or on 40 inches color TV which was hung in the drawing-room of her master’s house. She watched a serial on television, where a Goddess did some mistake and she was punished. And the punishment was she had to stay on earth unless she was given mercy. She wondered,

One thing she knew very clearly that she did not want to lead her whole life with an un-smart man who would come to choose her bride wearing a lungi. Just after two days of reaching her village, her marriage date was fixed. Their relatives had started appearing. Mukta looked very quiet but a storm was passing through her heart.

Next few days she could not sleep properly. There was a table clock in her room. The same tick-tock of the clock gave her mental tortures now. How monotonous! How mundane! Life had lost all the sparks for her. When the whole village could fall asleep, the tick-tock sound of the clock made her breathless. How the sound could be so monotonous and tiring, she thought again and again.

But the day of the wedding had to come the way dreams come during sleep without warning. As usual of wedding days, on that day a sound of weeping was also coming from Mukta’s house. Everyone was giving Mukta a farewell with tears.

Especially, her mother’s tears touched everyone. Mukta was in a white dress.

The previous night Mukta was found hanging with a tree at their back yard.

The writer is working as the Assistant Registrar at the Department of English, Eastern University. Her hobbies include reading, gardening and traveling.