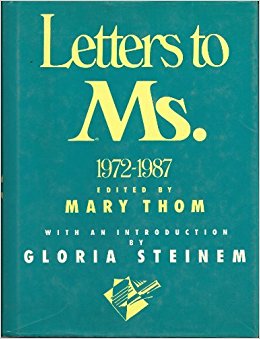 Throughout history, the role of women has changed a lot. About 100 years ago women were not allowed to work, study, vote, drive and many other things depending from country to country, or from religion to religion. Women were or are associated with domestic duties such as housekeeping, food preparation, and child care.

After reading a very interesting article on www.barinpickings.org I decided to share some interesting things with you. It is about a book called Letters to Ms. 1972-1987 edited by Mary Thom with an introduction by Gloria Steinem.

I chose this because the letters that were shared in the book were written by regular everyday women during 70s and 80s. I will share some of the most interesting one’s with you so you can see for yourself the differences between the woman from past times and today woman or even find something that is still the same.

I always insist that women should always stick together, and always trust each other, but this woman was mostly mistrusted by women. This is something most women can still relate to today. This is her letter:

“I work part time at a gas station in Oakland. I pump gas, wash windows, put air in tires, check and charge batteries, check transmissions, change oil, hub jobs, and other basic things. I don’t claim to be a mechanic; I’m not. But I’m getting a little tired of women asking me to get “one of the men” to check their tires, water, and oil. I have been trained on the job to do these things.
Men seem to trust and accept my service much more willingly than the women. One woman asked me to check her transmission. I did and found that she was completely empty and suggested she add a quart of transmission fluid. She didn’t believe me and asked that I get “one of the men” to check it out. So I did, and he told her the same thing.
This happens every day. I wish there was something that could be done. It is hard enough for women to seek positions in fields that are dominated by men without having to deal with mistrust and lack of support from other women.

The next letter is about a woman who decided to change her work environment. Let’s see what she did:

“I finally got up the courage to challenge an old established male tradition in my office. I do telephone sales. Our working area in the office has always been covered with “girlie” pictures and photographs of devastating (and devastated) maidens. This made us few women in the office feel terribly uncomfortable.
When the majority of the male staff was out to lunch, we proceeded to rip the latest issue of Playgirl of its best. Over my desk now hangs one gorgeous specimen of the male species, the centerfold. Everywhere there was a girlie picture there are now beautiful stud photographs.
I think the reactions of the men in the office could best be summarized in terms of shock. Although everyone tried to be good humored about it, jokingly or otherwise, they all compared themselves in some way to the models.
It was a marvelous experience to see super-duper macho stud types go all to pieces when confronted with the same thing we have had to face for years — images of ourselves as we could never hope to be, images of ourselves as seen only in the minds of men.

This one was my favorite, because as she said in the last sentence of the letter it clearly shows images of woman seen only in the minds of men.

I shared these two letters with you girls because I wanted you to see and realize that changes are being made and we are making them. Even a small thing can change the whole course of the history.

You should all know Rosa Parks and how important she was in the world of human rights, and what she did was simply refuse to stand up from her seat reserved for white people. From today’s perspective the action seems too simple, but from the perspective of that time, it was a huge step that has made a difference even today.

Each day I see women are no longer willing to be silent and sit in the back of the room, but slowly are coming forward and speaking out, and that makes me so proud. I’m proud of all of you and I’m encouraging you to share stories of yourself and the positive changes that you made in your own environment.

SAFIGI Outreach Foundation Ltd is a not for profit organization based in Zambia with a vision to raise a generation where girls are empowered, equipped and fulfilled in every aspect of their life, for the development of the entire world. To know more about SAFIGI’s goals and activities, visit: http://www.safetyfirstforgirls.org