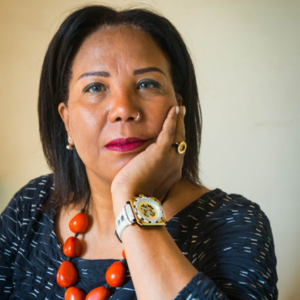 “The more resistant and resilient we are, the more we push the state and people to change their mindset towards respecting women and human rights.”

Azza Soliman is an Egyptian lawyer, woman human rights defender and feminist. She is a co-founder of the Center for Egyptian Women’s Legal Assistance, and has been working on women’s rights issues for more than 25 years.

Tell me about your work.

I have been working for more than 25 years on women’s rights in the private and public spheres. I co-founded the Center for Egyptian Women’s Legal Assistance (CEWLA) in 1995, and currently serve as the president of its Board of Trustees. CEWLA works on combating violence against women, access to justice, and combating corruption through engaging women in the decision-making process. CEWLA also has a special consultative status at the Economic and Social Council of the United Nations.

I also worked as a consultant to Arab governments and feminist non-governmental organizations in Iraq, UAE, Jordan and Bahrain, where I assisted in the drafting of reports submitted to the Committee on the Elimination of All Forms of Discrimination against Women (CEDAW).

In 2010, I spearheaded a campaign to highlight nationwide corruption and its impact on women from a feminist perspective. These actions resulted in the closing of CEWLA for several months. In addition, I was one of the first people to call for the design of a civil law for all Egyptians on personal status issues, including a law for Christians granting them the right to divorce. I worked for the adoption of the Nationality Law permitting Egyptian women to marry non-Egyptians. Over the decades, I have worked on many issues considered taboo by both the state and society—including honour crimes, incest, and rape. I have faced a lot of pushback and harassment.

Can you comment on the role of patriarchal violence and the rise of authoritarianism as the context for increased risk for women human rights defenders?

As women human rights defenders, we defy this authority, taboos, and patriarchal hierarchy. We stand by our beliefs in the face of violations and crackdowns. We challenge both the state and the family in their authoritarian norms and patriarchal violence; especially that the state is not fulfilling its role (in accordance to the Constitution and the international laws) in protecting women from violence in private and public spheres. Of course, such a stand comes at a great cost to our personal, mental, and physical health and life. We are [subjected to] detention, travel bans, arbitrary arrests, and – because of our gender – smear campaigns.

Authoritarian states use family as a tool to put pressure on women human rights defenders. Many direct family members can be subjected to arbitrary arrest or torture if they support the women activists. In other situations, young women human rights defenders are being “handed over” to their families in order to force the family to silence them. Families, in such cases, can use multiple violent strategies to “discipline” the women including isolation, torture or killing in the name of honor.

Can you expand on how the government silences women activists?

With such work and activism, I have faced arrest, travel bans, my assets were frozen, and of course I have been subject to smear campaigns. I was called a “spy” in the media and a “non-patriot” and an “army hater.” I was also accused of receiving illegal funds to sabotage the country’s image.

As a woman, I was also called a person against religion and against Islam. I was accused by the media of inciting sectarian strife in Egypt because I called for fairer laws for Christians in Egypt. The part that was not visible to others was how such campaigns affected my work, health and my personal life because that constant pressure and the attacks increase my stress and anxiety.

Travel bans also affected my work as a consultant to many international and UN agencies. That affected also my well-being because I could no longer travel abroad for work or pleasure. The smear campaigns were severe to the point that one time I could not go out for a week because I was too afraid that I would be attacked. Yet, I decided I would not be intimidated. I, and other women human rights defenders, face these challenges every day.

How is the closing of civic space in the Middle East impacting women defenders?

It’s a global trend that civil society is under attack, vis a vis women human rights defenders. And Middle East/North African countries are not the exceptions. [Countries in this region] learn from each other. There is coordination between the security forces in these countries to report and follow women human rights defenders. Moreover, the countries in the Middle East/North African region have similar non-governmental organization laws. They learn and copy and paste drafts from each other. The main point of these laws is against freedom of expression and association. Also, the similar contexts and mindsets play an important role in violating women human rights defenders’ rights. For example, sexual violations and arbitrary detention can be found across the region.

What are the best strategies for resistance?

The main resistance strategy is to continue our work and activism. We don’t have the luxury to stop or lose hope. The more resistant and resilient we are, the more we push the state and people to change their mindset towards respecting women and human rights.

Moreover, taking care of our mental health and wellbeing is an essential part for me. I’m not ashamed to feel sad or frustrated. I came to understand that I can lose sometimes and that is OK; tomorrow we can win another case and another struggle. It’s important to wait, look, and reflect about our work and respect people’s different approaches and coping mechanisms.

We do not need to present ourselves on a silver plate to the state. Unnecessary risks should not be taken because we, as people, are more important than that risk. Assessing risks doesn’t mean fear; it means checking priorities and other strategies that might work.

WCI Condemns the attack on Hindu Minorities in Bangladesh