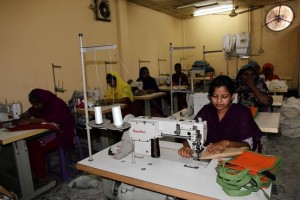 Women Chapter desk: A startup tote-bag maker in Bangladesh is testing the limits of the country’s rough and tumble garment industry.

Kazi Monir Hossain, a volunteer rescue worker at the deadly Rana Plaza garment building collapse in April, wanted to help factory workers get back to work after the disaster. But many swore they would never set foot in a garment factory again. So Mr. Hossain used donor money to set up a business making jute and cotton bags.

Four months into the venture, Oporajeo—the Bangla word for “invincible”—employs 21 former Rana Plaza workers. In a small workshop on the same street as their former worksite, the recruits sew coarse and colorful jute into simple tote bags, flower-patched purses and wine carriers.

“Once upon a time jute was very famous in Bangladesh,” says Mr. Hossain. “We can promote it again.”

Mr. Hossain has enough orders to keep workers busy. But he faces a challenge in meshing his ideals with the realities of Bangladesh’s giant garment trade. The world’s biggest retailers come to Bangladesh looking for workers who will cheaply produce their own designs. The retailers aren’t shopping for local-culture products.

Moreover, big retailers are drawn to low production prices made possible by the lowest minimum wage of any major garment industry—but Mr. Hossain aspires to pay his workers more. He pays his base-level employees 40% more than the country’s $38 minimum monthly wage. A government panel recently recommended raising the minimum wage to $67 a month, but Mr. Hossain aims to make Oporajeo’s starting wage $100 a month.

Jute-bag orders come through dealers, whereas many clothing retailers deal directly with the garment factories. The retail giants that buy garments in Bangladesh have eluded him. Mr. Hossain says he has met with representatives of European retailers, but they tell him they are interested in sourcing apparel, not bags.

Many of the workers from the collapsed Rana Plaza building, which killed 1,100 and injured thousands more, say they don’t want to return to garment factory employment. But there are few other job opportunities for the garment industry’s four million-strong workforce. Other apparel sectors such as shoes and leather, which are well-developed in China, Vietnam and Cambodia, have minute production in Bangladesh.

The skills required for making Oporajeo’s jute and cotton bags are similar to those for clothing. Most of the sewing machines are the same model the workers used before. Jute is a tougher, thicker material to sew than cotton, so it takes longer to stitch the pieces of fabric together, and attach zippers and pockets. Yet the lines are straight, so the task is simpler.

“It’s similar work,” says Lovely, a 20-year-old former garment worker in the Rana Plaza building who goes by one name. “I will never go to a garment factory again but I have a very strong will to work.”

Jute predates the garment industry in Bangladesh. Crops that yield the long natural fibers have thrived in the climate of the Bay of Bengal for decades. Bangladesh is the second-biggest producer of jute after its neighbor India, according to the United Nations’ Food and Agriculture Organization.

Jute, like linen, is back in vogue thanks to growing demand for environmentally friendly fashions. Grocery stores sell burlap bags, made from jute, as an alternative to plastic. Brands such as Kate Spade, Mango and Le Prince Jardinier sell bags and iPad cases made from jute or a jute blend. Celine, an influential designer label, has used jute recently in accessories.

So far, Oporajeo’s rough-textured bags, which wholesale for less than $2, are utilitarian, rather than fashion accessories, although the company plans to branch into more colorful “fancy ladies bags” with braided handles and flower appliqués.

Mr. Hossain saw jute-bag production as a way to marry two local attributes. “I learned that Bangladesh has top quality jute, and the world’s cheapest labor,” he says. He knew nothing of manufacturing. Before Rana Plaza, Mr. Hossain, 27, who trained as a mechanical engineer, ran an organic farm outside of the capital Dhaka.

Following his work as a rescuer, Mr. Hossain tried to help victims by providing groceries and paying rent for those who had no income. “But we realized the help we were giving wasn’t a long-term solution. They needed to get back to work again,” he says.

In July, Mr. Hossain launched Oporajeo out of a one-level building—so the workers wouldn’t fear a collapse—that shares space with a wood shop. He bought sewing machines with local donor money and researched bag design online.

He plans to give half of Oporajeo’s profit back to workers, and provides health care and education stipends for workers’ children—social benefits that are rare in this country.

Workers produced samples of wine carriers, shopping bags and other basics to present to potential buyers. A sample that Oporajeo made for a local nongovernmental organization bore the slogan, “I am not the wall that divides, I am a crack in that wall.” (Cracks in the walls of Rana Plaza alarmed workers the day before its collapse.)The first clients were aid and development groups Mr. Hossain met during the rescue operations.

A new order for 520,000 cotton bags will take the next two months to manufacture.

Now, Mr. Hossain dreams of opening a garment factory making shirts and jeans. If he can raise enough money, Mr. Hossain would like to hire 250 more workers next year—some to make bags, others to make clothes. “There are thousands of international garment buyers,” says Mr. Hossain. “This is a game.”