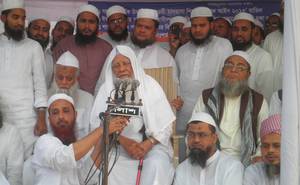 Audity Falguni: ALLAMA Al Shafi, the spiritual leader of Hefajat-e-Islam, changed his tune saying he did not term women as “tamarind” but as “flower queens” (phool rani) whose fragrance everybody wishes to inhale.

He further stressed in a public meeting at Hathazari that a handful of ministers of the present government have misquoted him saying he equated women with tamarind.

He said that women can work in offices and factories, but wearing a veil and in separate work stations. Junaid Babunagari, the Secretary General of Hefajat-e-Islam, echoed his leader’s words that women will be allowed to work in factories but within purdah. He iterated that if the government does not allow them to hold their scheduled demonstration in Dhaka on November 15 they would launch a strong movement.

It’s difficult to ignore the all-out vandalism carried out by your men on May 5 evening, who burnt numerous copies of the Holy Quran, uprooted the trees from road dividers, damaged the small shops of pavement hawkers, set fire to the Communist Party of Bangladesh (CPB) office and attacked Awami League office.

This nation has also witnessed the fabrication by some so-called human rights organisations who first claimed that the death toll was 2 lakhs, and then 50,000, on May 5 night. Then the number of deaths began gradually declining to 2,500, 500 and eventually 61. Being served a notice by the Ministry of Information to hand over the details of the 61 “dead” persons, they failed to do so, and some of the madrasa students reported to be “dead” by these HR groups were later found to be attending classes at the madrasas.

The government has already paid a heavy price in the last city corporation polls in four cities due to the propaganda of “genocide on May 5 night”. The ex-mayors from Awami League in two (Barisal and Rajshahi) of those four cities had worked very hard for their people and for development, but in vain. Yes, the present government also has a number of failures. But it has some feathers of success too in its cap, like surplus in agriculture and power generation, reduction of corruption in education sector, zero presence of extortionists and improvement of law and order, increase of reserve in Bangladesh Bank, safeguarding the national economy from global recession impacts, and of course the conduct of War Crimes Trial.
Thus, against the backdrop of demolition of Hindu temples by BNP-Jamaat axis between February and March; terming of the Shahbagh movement as an “assembly of atheist, wasted youths” by the opposition leader; several attempts by a handful of presently banned newspapers and TV channels to unleash communal riot; several riot attempts in Bogra and Satkhira by Jamaat cadres through photo-shopping; and the recent attacks on the minorities in Pabna and Lalmonirhat, we need to revisit the pertinent points of 13-points demands of Hefajat-e-Islam and offer our answers.
Hefajat demand-1: Re-instatement of “Absolute trust and faith in the Almighty Allah” in the constitution as one of the fundamental principles of state policy.

Our response: The 15th Amendment to Constitution (published in October 2011) reads in its preamble: “[BISMISLLAH-AR-RAHMAN-AR-RAHIM (In the name of Allah [the Beneficent, the Merciful] /In the name of the Creator, the Merciful).” Thus our Constitution endorses Islamic faith along with faiths of other religious denominations as this State was born through the sacrifices of Muslims, Hindus, Christians, Buddhists, Bengalis and indigenous people.
Hefajat demand-2: Enacting blasphemy law to ensure capital punishment for maligning Allah, Islam and the Prophet.

Our Response: Section 295 A of Bangladesh Penal Code and Section 57 of the IT Act 2006 provides imprisonment up to 10 years and less than Tk.1 crore as punishment for such offence.
Hefajat demand-3: Arrest and stern punishment of the “atheist” leaders and bloggers of the Shahbagh movement.
Our response: The Shahbagh movement leaders have firmly denied the allegation of being “atheists.” And some of the alleged bloggers are under trial.

Hefajat demand-4: Stop foreign cultural intrusions including free-mingling of men and women and candlelit vigils, and put an end to adultery, injustices, shamelessness etc. in the name of freedom of expression and conscience.

Our response: Adultery is punishable under Section 497 of Penal Code and section 75 of Dhaka Metropolitan Police (DMP) Ordinance 1976. Articles 27, 19(3), 36 and 39 of our constitution ensure equality in work, movement, freedom of speech and actions for men and women in every walk of life. So Hefajat’s demand is contrary to our constitution. Millions of women in RMG, agriculture, teaching, banking, hospitals, police, military and other GO-NGO-private services would be jobless if it were to be so. That will be detrimental to our national economy.

Hefajat demand-5: Stop turning Dhaka (the city of mosques) into a city of idols and setting up sculptures at intersections, colleges and universities.

Our response: Sculptures exist in a number of Muslim countries. Besides Articles 23 and 24 ensure the proper conservation of our historical and archaeological heritage. Bangladesh is also a signatory state to the Unesco convention.

Finally, today, when Bangladeshi women like Nishat Majumder and Wasfia Nazreen are conquering Mount Everest, the 13-points demands of Hefajat-e-Islam should not cause our march of progress to revert to the darkness of the medieval age.

The writer is Communication, Web-site and List-serve Manager at Gender and Water Alliance. E-mail: [email protected]