Rodela was walking beside the supermarket. It was a muggy August day. Rodela’s fair face was flushed from the vicious heat of the sun. Her neck was burning under her dupatta. Rodela took out the water bottle from her handbag and poured the last sip of water into her throat.

She was already late. She was supposed to be there at 2 pm. She started to walk faster.  Rodela tried to remember Urvashi’s class routine. Maybe, the 2nd period was Maths. She couldn’t remember well. But, it didn’t matter. She was happy that her daughter was a 3rd grader, studying in a day shift school. She will make sure that Urvashi also wouldn’t have to drop college like Rodela. Rodela remembered the day when she returned from college, she saw a burly guy sitting on the couch. Her parents were also there, talking with a goofy smile on their face. The person was staring at her viciously. Her mother took Rodela inside. With an ecstatic face, she said that a very good marriage proposal had come for Rodela. That man sitting on their couch was her future husband. Rodela was so stunned that she couldn’t even utter a ‘no’ then.

After that, a lot had happened. Rodela didn’t want to recall all the struggles, fusses occurred after that; all the curses, bindings regarding her affirmation. She didn’t want to recall her getting married to a land agent, who forced her to drop out of her college. Her mother had said that it would be the best option for Rodela’s life as he was from a respectable family and well settled. It was the best proposal that would ever come to a poor family like theirs. Look, where that best option led Rodela? She was a single mother, abandoned by her ‘best man’ because he had found another ‘best woman ‘ and moved to another place. He hadn’t left her any capital, asset, nothing. Absolutely nothing.
But, among all these miseries, God had given her one precious gift, her Urvashi. Sometimes, she thought that all these hardships, her residing in a friend’s house after being abandoned, playing out every last string to earn money by being employed, being rejected constantly are worth the fact that, she had her Urvashi with her.
She was blessed with the fact that she had a place to live with Urvashi and she could somehow pay for Urvashi’s study, and furthermore that, Urvashi was among the top 3 in her class!
Rodela looked at her wristwatch.2:13. She peddled faster as her manager might get angry and might deduct her salary. But she needed the money to pay Urvashi’s tuition fees tomorrow. Moreover, she had to be back within 5:30 to pickup Urvashi from her school.
She took the left alley to the side of the grocery store.
Rodela pushed the worn-out grey gate of the red building to her left. She took the stairs and got to the 3rd floor. The manager was strolling there. He saw her and rushed towards her and said, “Tina, will you always continue to be late like this, every single day? He had been waiting for 15 minutes. You know, he only goes to your room. Now, take him to your room and don’t piss him off .” Rodela had made herself known as Tina here. The person standing here and “Urvashi’s mother” was not the same one.

Tina walked towards her room and saw the man waiting.”You’re late.” Tina mumbled a sorry and unlocked her room. They came inside and then, he closed the door. He took Tina’s hand and pulled off her dupatta. This was Tina’s room. There was Tina’s bed. This was how she was destined to earn money. She thought of Urvashi. She was happy that Urvashi was just in third grade… 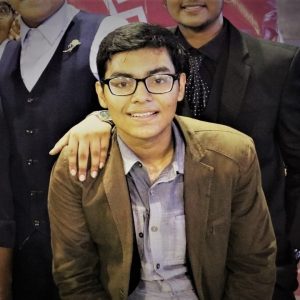 Faisal Raihan resides in Dhaka, Bangladesh. His hobbies include reading and writing.