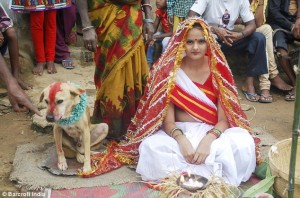 Taslima Nasreen: An Indian girl was forced by a superstitious society to marry a dog. I am not surprised. To get rid of evil spirit women often are forced to marry trees or animals. Genius has its limits, but stupidity has no limits.

In a deeply misogynistic society, probably it is better for women to marry dogs. It is better because dogs won’t abuse them or kill them. Dogs are definitely much more faithful than men.

The incident has happened in in the eastern Indian state of Jharkhand. An 18-year-old Indian girl has married a stray dog as part of a tribal ritual designed to ward off an evil spell.

Mangli Munda, from a remote village of Jharkhand, wed the canine in a lavish ceremony.

The wedding was hastily organised by village elders after a local guru led Mangli’s parents to believe that the teenager possessed ill-luck and that marrying a man would bring destruction to the family and her community.

The baffled dog, Sheru, a stray found by the girl’s father, was brought to the wedding in a chauffeur driven car and welcomed by revellers.

Mangli, who has not been to school, said she was not happy to wed a dog, but insisted that it will help change her fortunes.