Our society seems to be allergic to us- the girls who live in hostels; leaving our homes behind. They alienate us from those privileged ones who live in their homes. Everyone should have the right to follow their dreams of being independent and to be on her own.

We live in hostels with the dream of being educated. There lies the greatest objection. We get tagged by misogynist patriarchal society before completing our education.

It was a few days back when I found one of my hostel mates upset. I asked her the reason. She told me she was hanging out with some of her friends in the evening when she overheard some guys talking about her. The gist of their discussion was that a girl who lives in hostel tends to be ‘out of control’. The statement clearly reflects the mentality that this patriarchal society has always been unable to accept women with the utmost freedom. This freedom hits on the core of their dominance. So they start stereotyping in order to justify their patriarchial mean mentality to look down upon women’s choice of freedom.

I would like to highlight one factor here. Those who live in hostels in Bangladesh know that most of us don’t have kitchen facilities here. We have to go out for our meals. Two years back when my friend was having tea outside, one of our classmate’s father whose daughter lives in the house commented over my friend. She later came to know that he said that it was normal that the girls who live in hostels and are haughty will shamelessly drink tea on roads. What can we expect from them? Did he ever think once about how his daughter would have survived if she were to live in a hostel? If he for once had thought about that maybe he would not have uttered such words Maybe the society could have a different point of view about us then.

These tags never leave us. We are judged by ‘groom parties’-families of prospective grooms based on this fact. Sometimes this situation scares me. But at the same time, I realize I’ll be proud of my struggles in the end. After many years when I will look back, I will see myself as a struggling smart woman to have survived all the obstacles to become educated.

At the same time, these tags will accompany me. The issues or incidents  I have mentioned so far are the stories of our daily lives- these are nothing new. So what? We just pretend to be developed and advanced. But mentally, we are still living in Stone Age. Our mentalities have not progressed in general. Even now it is considered our, the women’s sole duty to adjust to this rotten society!

The original article in Bengali was published in Women Chapter’s main site on March 29, 2017. 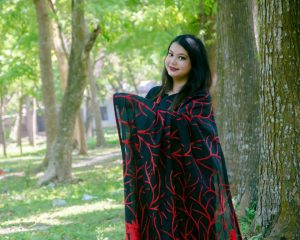 Ridwan Mou is currently a student of Rajshahi University and is an entrepreneur at the same time. She owns an online-based clothing store named ‘Shinduk’. She