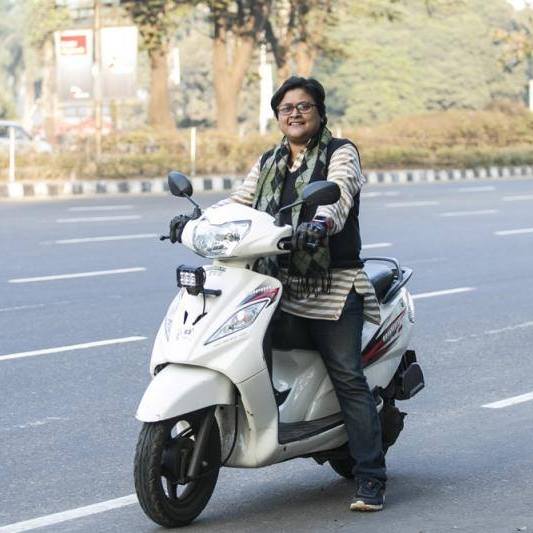 It was about 8 years ago. I had to spend all of my hard earned income on CNG as I can’t travel on public transport. I traveled public transport very few times. After Waiting for Bus for hours in stormy rain or burning sun the bus was already overcrowded. But somehow by miracle power bus staff would take more passenger. And I would become frustrated.

That’s how out of frustration I bought I bought an electric battery motorcycle. Went straight from the showroom to home. My mother objected at first but later accepted. In that time oil scooty was not available in the market. Only Chinese and electric battery scooty was available in few shops. But the problem in electric battery scooty was that the speed was less and distance needed to be measured before going somewhere.in need of an extra charge, people would not let recharge scooty. They did not know that it does not cost that much electric bill. After much more time I bought oil scooty. Speed and distance were in my hand. A new chapter began.

After that, I never had to look back. I could go wherever I wanted to go whenever I wanted. I was in power of myself. I did not need to depend on anyone else. I was my own controller.

I went to many places on my scooty. It became a hobby rather than need. I can’t express this feeling. My team went to Comilla, Noakhali, Kustia, Mymensingh, Manikgonj, Meherpur and many places. Recently I went to Chittagong-Bandarban – Coxsbazar through scooty. In total more 1200 kilometers. Created a new history in Bangladesh by going to the second highest road in South Asia – Thanchi Alikodom in Bandarban District. It is really hard to ride in scooty in this high and steep roads. Only those people who have been that road will understand how risky those roads are.

With good experiences, there are also some bad experiences in my scooty life. But I left those bad experiences way behind my back. At the beginning time when I started to ride my scooty in the roads of Dhaka, people would throw stones, spit on my back. Even one pickup van knowingly made an accident that made my right hand was injured broke into three pieces.

Let me share one incident from the earlier times of my scooty. I was in Banani Kakoli signal. One male passenger from my nearby running bus hit me on my back. I was running in my scooty so was the bus. When the signal came, I just saw a yellow shirt sleeve in looking glass and jumped on that bus. The man was near at the door, did not need that much time to find the culprit. I just made the man get out of that bus and slapped him right there. He was shocked at first but then started to react angrily. I slapped him again. This time he was violent and public sympathy was also with him. At that moment the bus driver came down, slapped that man and said he saw what that culprit did on the road. Because he was right behind me. Then that man escaped running.

There are thousands of stories like this. I know those who are reading this today, especially women, they also have many experiences like this. Every day we have faced these things when we leave home.it goes worse at night. But still, I feel safe in my scooty among all these insecurities. Every day early in the morning or late at night I am in my scooty.

In December 2017 when we made the record of going to the second highest road in South Asia, along with all congratulatory messages there was one request from many people to train other girls to ride scooty.

I was feeling selfish that I can go wherever I want to go whenever I want. But some people cannot do it though having capability. Because they have no training on scooty, they don’t know where to buy, what papers are needed and other paper works.

From that point, I thought many times to start a school of scooty to teach only girls. After a lot of thinking I talked to my sister Nishat Jahan Rana. My sister always supports m in everything. Selina Sheli also came. They helped me to plan and budget. I told them I cannot train them on the open road. I need a place. At least two scooty and a good environment are needed. They managed all these that’s why I could start the work.

The open road is a no because the open road is not available in Dhaka City. And I need to do this at early in morning or after afternoon because I am working in an organization. I have to do this after office time. And again if the girls reached there before me what will happen to their safety. And people see some gilts together at an open road they may create troubles for the girls that I do not know how to solve.

Another reason for this is Washroom. When I was learning to ride scooty I faced this problem of washroom scarcity when I needed it. So I selected the training place in a way that a woman can go anytime, can stay there with safety, can go the to washroom in need, can eat any snack or can even read books under a tree.

In this training, all the necessary paperwork, safety rules, traffic rules all these theoretic class will be taught along with riding class. A scooty driver will be made in exchange for 2000 taka honorary who will be able to make her own way rather than facing all public transport hassles. The whole course will be completed in 7 days. For a cyclist, it will be easy to learn to ride scooty.

But those who do not know cycling, they don’t need to get scared. The whole game is about balance. You will learn to balance through scooty. Courage is the main point. Those who have courage will own the road. So gather courage and start now.

We will meet friends on highways, on busy roads.

Note: The project is in progress, we will feature the details once confirmed.

Link to the original article in Bengali: https://womenchapter.com/views/25676

Atiqua Roma studied Anthropology from Rajshahi University. She is now working with a Japanese Donor agency named Shapla Neer as an Advocacy Officer (Project In-charge of Shapla Neer Girl Domestic Worker Advocacy Project). She was a professional Volleyball Player. An adventurous individual, bike adventure is her passion, as is traveling. I love to work for humanity, especially for women and children. My dream is to increase the mobility of women in a safer way.