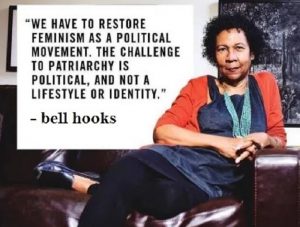 We are deeply saddened about the death of bell hooks (pen name of Gloria Jean Watkins), Distinguished Professor in Residence in Appalachian Studies, prodigious author, public intellectual, and one of the foremost feminist scholars. She died at her home in Berea after an extended illness at 69. Her family did not release a cause of death, but said she had friends and family by her side.

Gloria Jean Watkins was born on Sept. 25, 1952 in Hopkinsville, Ky, and adopted the pen name “bell hooks” from her maternal great-grandmother, Bell Blair Hooks. She adopted the pen name in lower case letters, she told interviewers, in order to emphasize the “substance of books, not who I am.” She published her first book, “Ain’t I a Woman? Black Women and Feminism” in 1981. Her literary career continued with more than 40 books of including essays, poetry, and children’s books. Her topics include feminism, racism, culture, politics, gender roles, love, and spirituality.