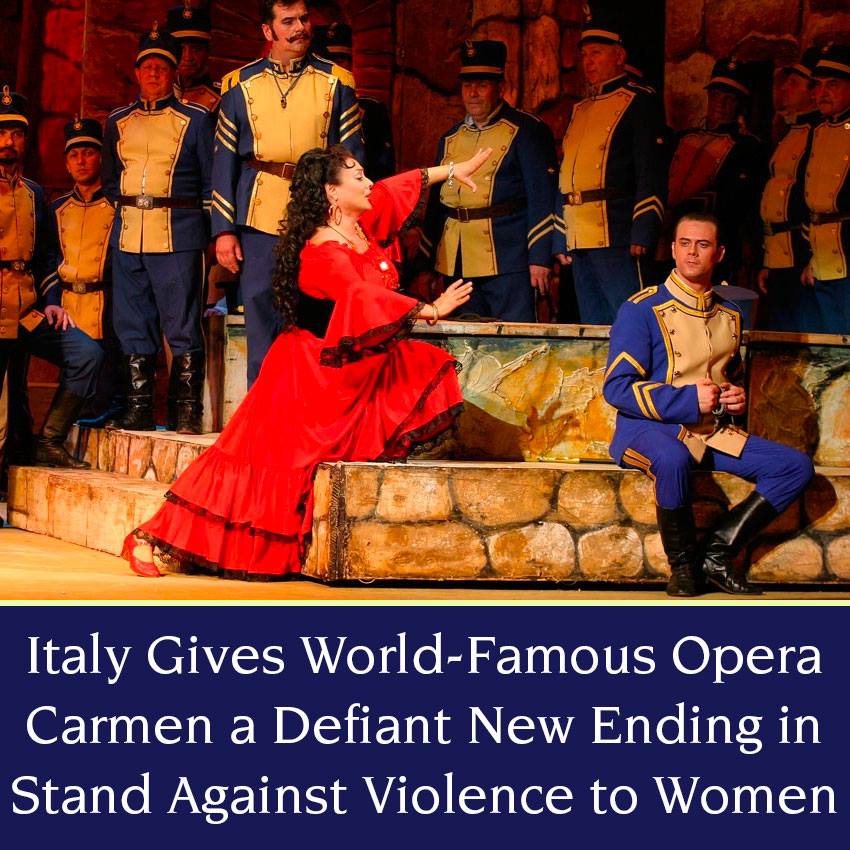 A new Italian production of the world-famous opera “Carmen” is taking a stand against violence toward women with a defiant new ending! In the traditional finale of Georges Bizet’s 1875 opera, the heroine Carmen is stabbed to death by her jealous, thwarted admirer; in a new sold-out production that opened in Florence this week, Carmen grabs Don José’s pistol as he attacks her in the final scene, shooting him in self-defense. The significant change was made in support of ongoing efforts to end the widespread violence against women in Italy, where cases of femicide, or women who are killed by jealous husbands or boyfriends, now account for 37% of all homicides. As Cristiano Chiarot, head of Teatro del Maggio Musicale Foundation, asserts: “At a time when our society is having to confront the murder of women, how can we dare to applaud the killing of a woman?”

“It’s a way to say to all… ‘enough of the violence,’” soprano Veronica Simeoni said before Wednesday’s performance. “In this case, there’s a precise message against violence targeting women, a plague that has concerned all of us always, and in this moment is before the eyes of everybody.” According to the World Health Organization, violence against women is epidemic worldwide, affecting approximately one-third of women globally. Like other countries, Italy suffers from a high rate of violence against women, with the UN calling domestic abuse “the most pervasive form of violence in Italy.” Recent efforts by Italian women’s rights group have increasingly brought attention to this crisis as they have pushed for stricter laws against abuse and violence and against victim-shaming.

Chiarot says that the changes to Carmen were made in support of such anti-violence efforts: “(Our opera) is an attempt to highlight the modern-day abuse and mistreatment of women in Italy where femicide is not an uncommon occurrence.” Paolo Antonio Klun, a Maggio spokesperson, adds that “as far as we know it is the first time that the ending to Carmen has been changed.” When the idea was raised to change the ending, Leo Muscato, the opera’s director, admits that he hesitated at first. “The death of Carmen is the engine that drives the opera,” he says. “Why reverse the situation? Then I understood that what Chiarot was calling for was reasonable. The theme of death in the opera has a strong masculine element – the woman must sacrifice herself in order to save her freedom. It is a point of view that today makes no sense.” Klun agrees: “Carmen was written 150 years ago in a very different cultural context. Times change.”

To read more about this new production of Carmen on Reuters, visit http://reut.rs/2CyB0YY