Kevin Boiragi: Has Bengali ever been considered as minority? Few things need to be explored. First, the initiation of Bangladesh with the outnumbered support from both inside and outside its borders was represented by millions of Bengali. There was no division based on race, colour, let alone religion; rather, it was the unity among the Bengali that led to the birth of this country. The few bad apples, notably the razakars and their allies were the minorities who fought tirelessly to keep the spirits of Pakistan alive. 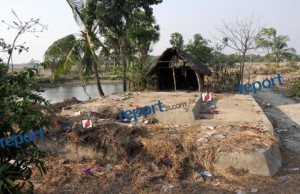 This spirit of Pakistan largely lies on specific ideologies that are fiercely motivated by one specific religious (mis)interpretations. I situate this fact on a present tense since, and quite sadly, there are ample amount of people who still would like to see transformation of Bangladesh into ‘Banglastan’. Hardly these people have any feelings and connection with Pakistan, rather, their feelings and intents to transform this country otherwise have been very strategically constructed in post ’75 era. I leave the politics of this strategic construction for a later discussion. Nonetheless, Bengali were the majority who rejected the idea of having a nation, a state, and a country to be considered as Pakistan in 1971.

These are the same people, and their families who live in 2016. How then the term minority gets to include among Bengali in present days? How then ‘minority’ is strategized in everyday practices?

Second, given the recent fundamental uprising throughout the world, Bangladesh takes a bite of it. When the IS divides humanity over insanity, Bokoharam pledges fundamental ideologies over religion, fanatics in Bangladesh try to divide the nation and the country on the basis of majority and minority issues associated with religious beliefs. Those perverts who in the name of a mass religion claims superiority over one another try to ignite fundamental crap among the general public.

They get their attention for a number of factors: (A) These fanatics are represented by the so called religious leaders, who know nothing but convey greed, non-sense, and appeal for a so-called Muslim Bangladesh. (B) These lunatics, by virtue of Islam being stated as the state religion in the constitution, are therefore protected and supported by the state and the judicial system. (C) And most importantly, perpetrators of such ongoing hate crimes over the majority non-partisan united Bengali are not brought to justice (which is, however, already biased over the issue of state religion), and hence remain unaccountable for their actions. In all those above cases, a handful of minorities terrorize the majority of the people, and when they do so, they do not consider who belongs to which religion. Because their understandings of a religion are radicalised, politicised, and are used to gain nothing else but their own agendas.

Religion, which has been historically used as a tool to control (among others) mass people, has been used by the elites and so called religious figures to obtain power, govern the believers, and maintain social status in Bangladesh. These groups of elites and leaders have become so powerful since ’75 that we saw some of the razakars got elected as ministers on general elections, and Hefazot-e-Islam appearing as a mass force. It has become so powerful that aligns with people’s minds and bodies as it threatens the government on a continuous basis.

How did this happen? This takes us to the final and complicated part of this discussion.

The term minority has itself become problematic. With its nature and usage in the discourse, it has very strategically shaped the sentiments, dialogs, and the governing system, like any other discourses embedded within power have done in post ‘75 era. A discourse analysis is very much needed here. When a country is born, contains its nation based on equality, rights, and freedom, strategically it reduces the scope of partisan religious ideologies, and requires the state to, at least promote secularism, as it has been done since ’71 in Bangladesh.

In other words, Bangladesh cannot have any religion as a country, and as a nation, let alone as a state. However, as the state changes its policies it can accommodate different ones accordingly. The state is not the people, but a structural body that governs the people. People is different than population; as famous French sociologists Foucault argues, governing people out of a population is what we see in irrespective of states at present. The power to govern these people is what he calls governmentality, and not necessarily there are coerced actions to govern people- there are discourses that shape and make people to behave and govern themselves, says Foucault. An example of this is this concept of a minority and majority, which has been further problematized by those who reign, and who have their own political agendas.

For instance the Hindu- Christian-Buddhists have been used as a vote bank throughout the post ’75 era for all political parties concerned.

Why? Why would majority of the Hindus and the Christians and the Buddhists would support Awami League and not BNP or Ershad in the ‘90s? One of the reasons, as we analyze, is that these groups have sought a sense of security in supporting Awami League. By virtue of this statement, it is obvious that they felt insecure in the presence of all the rulers since ’75 until the ‘90s. Slowly the majority concept has been overturned and became a minority concept that led to divide the nation by religions and beliefs in this particular context.

Now, the term minority refers to the Hindu, Christian, Buddhists, Queer and alike. Strategically, minority has also been used to identify the handful indigenous people in the country; for example it has been used to attain the Chittagong Hill Tracts Peace Accord.

Unfortunately, strategies that politicise minority-majority distinction have effects, and far reaching damaging consequences in the society. Constantly we observe people belonging in this category are identified as minorities, this creates a sense of inferiority among them, and objectifies them as targets of communal, and faith based aggressions.

A perfect example would be the Ramu tragedy that took place on September 29, 2012. Buddhists were identified as minorities; pagodas, temples, and statues were humiliated, destroyed, people were tortured, and all these happened when the Awami League remained in power. Taking down statues in temples are not a new phenomenon in Bangladesh, although the politics of it have been strategized since late ‘90s. For all these, the state is called upon to provide securities.

The question that remains unexplored is whether the state needs to provide security to its ‘minority’ population (if so, why and from whom?) or is it the Bengali as a nation requires security? If it is the ‘minority’ in particular, then the state needs to bear the responsibility for erecting a false consciousness within the nation and creating divisions within. If it is the nation, however, then the meanings of minority currently exercised should be erased. The term should specifically be used to identify the handful perverts who try selling the nation based on religion doctrines and beliefs rather.

I suggest redefining the very term minority as it does not represent the views of the nation, and the country. And as we do so, the dogs that are barking against humanity get lesser attention and public support (if there any at all at present). This pressure would then make them feel inferior, would allow them in making mistakes and would make it even easier for the law and enforcement agencies to capture them and bring under the justice. This is not easy, as the very idea of ‘minority’ is being diluted in the hearts and minds of millions of Bengali in such a way that inferiorizes ‘them’, and sadly, gives this ‘imagined communities’ an identity based on religious beliefs such as Hindu-Christian-Shia-Buddhists and so on. The mainstream media should also avoid using minority as a term in identifying the victims and this ‘imagined communities’. Rather they should use the term to identify the handful perpetrators of hate crimes, and the elites who want this term to be embedded in the discourse and power.