In a campaign started by Dr Bahar Jalali, hundreds of women are using hashtags like #DoNotTouchMyClothes and #AfghanistanCulture along with their pictures in colourful traditional dresses

The Taliban are breaking their promises on women’s rights and inclusivity in Afghanistan. From taking away gender-neutral and equal opportunity classrooms to chipping away at their most basic freedom of choices in everyday life, women are paying the most profound price of a hurried and jagged US exit. 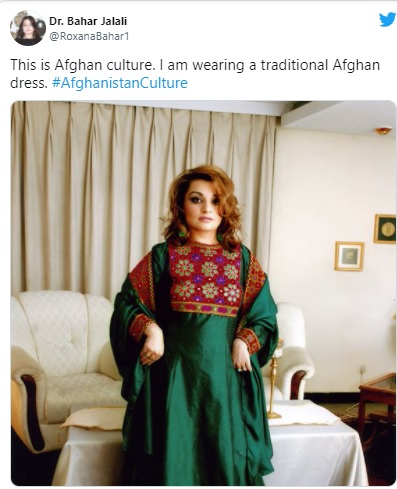 Even as they have shown an inclination for positive press and image makeover among the Western circles, the Taliban have shown they are least hesitant in using violence against protesters and doubling down with gag orders.

But women activists have been exploring avenues to make their voices heard. From facing batons and whips to armed gunmen in Afghan streets, a women-lead rights movement has been quietly brewing in the country. Most recently, they have taken to social media to reclaim their sartorial choices under a black and white Taliban rule.

Afghan women from across the world have started an online campaign to protest against the strict new dress code for female students imposed by the Taliban. They are posting photos of themselves wearing colorful traditional Afghan dresses on social media to reclaim their distinct culture against a monolithic version of Islam propagated by the Taliban.

In a campaign started by Dr. Bahar Jalali, a former history professor at the American University in Afghanistan, hundreds of women are using hashtags like #DoNotTouchMyClothes and #AfghanistanCulture along with their hijab-less pictures.

“I encourage Afghans worldwide to share the beauty of Afghan culture. Today, the Afghan nation and identity is facing a brutal assault by foreign terrorists who have taken our soil hostage and imposed alien ways on our people,” Jalil tweeted along with a picture of herself dressed in beautiful dark green robes.

Jalali’s campaign was an instant success, which even garnered significant media attention. She said that her’s was a campaign aimed at informing, educating, and dispelling the “misinformation that is being propagated by Taliban”.

“No woman has ever dressed like this in the history of Afghanistan. This is utterly foreign and alien to Afghan culture. I posted my pic in the traditional Afghan dress to inform, educate, and dispel the misinformation that is being propagated by Taliban,” said Jalali.

Speaking to BBC, Jalali said that she started the campaign because “one of my biggest concerns is Afghanistan’s identity and sovereignty is under attack”.

Posting a picture of herself on Twitter in a green Afghan dress, she urged other Afghan women to share theirs to show “the true face of Afghanistan”.