Every day my Facebook newsfeed is flooded with the news of rape.  Have the incidents of rape increased suddenly? I do not think so. Women have started breaking the silence. Today, I will not talk about rape incidents, rather I will talk about the lament which had not been revealed before the world due to family, prestige, and religion. A total of 20 percent of women/girls become victims of rape outside of the house while 80 percent of rape incidents take place in the house. Yes, you are hearing accurately, and … you people know the reality.

This is the story of a mother who had a little child named Tultul. The mother used to keep little Tultul to her grandfather when she went to the office. She used to bathe in the pond with her grandfather, go to the mosque, go to the sweetmeat shop, and pretend to read the newspaper with him. Apparently, it seemed that her life was very colorful. But at night, her grandfather kept her in his lap while narrating fairytales to her. Alas, little Tultul could not understand what was happening with her, she just felt that what is happening with her was not a good thing. Now, she understands everything. But she becomes shaky when her husband tries to get intimate with her after their marriage. She just cannot maintain her conjugal life like other people.

The age gap between Saira and her elder sister is 17 years. When her elder sister got married Saira still was young enough and used to wear short pants. Her niece is two years younger than her. Her brother-in-law is very affectionate toward her. When Saira was a student in class eight, She was going through her adolescent period. Her brother-in-law frequently came to their house to see her mother. As soon as he entered their house, he said to Saira, “Come to my lap… Once I took you in my lap…..you used to change dress in front of me…why you do not change dress in front of me nowadays?”

One afternoon, Saira was sleeping after returning from school. While she was asleep her brother-in-law tried to molest her, she then started screaming. When she informed her family about the matter, they scolded her saying that it was a matter of fun between Saira and her brother-in-law and why she is making a nuisance over it. Her elder sister and niece used to call her ‘Noti’ and ‘Bessha’ means call girl. She has been bearing the rivalry with them since then. After her divorce, her family members said it is obvious that a characterless woman like her will not be able to maintain a conjugal life.

All the cousins of Putul are boys. She loves to play with them. One of her maternal cousins used to touch her boobs and thighs since her childhood. When she became an adult, that cousin used to come to her house. When he stayed at their house, he came to her bed at night though her grandmother was sleeping with her. But she could not guess anything. Can we call it bravery or audacity? As we save them considering our family ties, they do not hesitate to harass us.

Shimul got married according to her family’s choice. She saw her husband at the dawn of her marriage day. She then requested her husband to give her some time to get intimate. Then her husband said he spent a lot of money on this marriage to wait. The sadist man was suffering from ejaculation. To hide his weakness he used to beat her. When she informed her family about the matter, they advised her to go to her elder brother-in-law as he was a doctor. When they went to his chamber he got her husband out of the cabin saying that he wants to talk to them separately. But then, he tried to rape her saying that he wants to satisfy her as his brother could not do so. When she informed her parents about the matter, they advised her to adjust to it as their daughters go to her in-laws’ house in red saree and return back in white saree (after becoming widows).

Millions of females have had their childhood, teenage and youth snatched away from them due to these types of depressing incidents.

These families stop their daughters when they try to speak out fearing what people will think about them and thus, their mentality help towards generating rapists in society. These types of incidents are not reported. No case is filed or no news story is published over these silent stories. After being raped, millions of girls start hating their bodies and they consider themselves untouchable. Many of them cannot run their conjugal life smoothly.

Females aged between 5 and 50 are raped in this society, but how many of these rape incidents are published in the newspaper? Most of the time victims do not get justice. Sometimes we blame women for not wearing a veil.

A five-year-old girl is definitely a kid. But when she is raped we say why she plays with boys, makes fun with uncles, and why laughs loudly? Lastly, we say, ignore what happened with the child.

We become frightened thinking that who will marry a raped girl. We worry thinking about facing society. But many girls are living like a corpse as they cannot share their pains with others for the sake of so-called dignity. How long they society and the girls have to be silent about being a rape victims.?

Shaila Hoq Tanju is currently based in Australia. A passionate feminist, she likes to travel and write in her spare time. 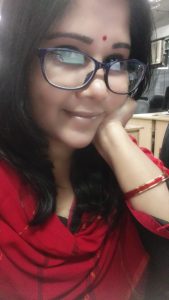 Rokshana Yesmin studied MS in Mass Communication and Journalism from the University of Dhaka. She has been working as a journalist for the last 18 years. Apart from this, she is involved in social movements, especially women’s rights movements. She regularly writes columns on women’s and children’s issues.