Ria Zoynab: “Why you are not wearing hijab if you are muslim?” This statement was still buzzing my ears as I was getting ready for my work today after the Eid vacation has come to an end.

Despite of all the stirring articles I have been reading online to get amalgamated against the international criminals, watching daily updates on the security enforcements assured by government, knowing that the investigations are being taken very earnestly to ascertain the actual reason behind the whole gruesome episode of Holey Artisan- I couldn’t stop myself from obsessing about this little statement that militants made while slaughtering Ishrat AKhond, one of the victims of the Dhaka attack of 1st July, claimed by ISIS. This was all she had to hear before taking her last breathes. 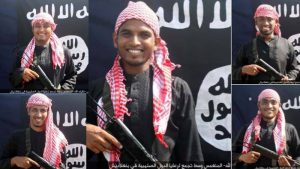 Ishrat Akhond- I never got the chance to have a one-to-one conversation with this lady, who happened to be a well-known business person of corporate world of Dhaka, worked in diversified international organizations as human resource professional. With a hope to have a great career in specified sectors like any other fresher, I followed her on professional networking sites and corporate events. Personalities like her are the reason girls of even conservative families like me get encouragement to think out of the box, to rise above all the social barriers. Women like her are examples of women empowerments. These women are the idols who kept the youth of our nation motivated to do something, to reach somewhere, to be someone.

By the midnight of 1st July when ISIS confirmed the death toll on their official site by uploading pictures, I was travelling, was away from my family, friends and my country. News was published in such way that foreigners being killed by ISIS in Dhaka at holy artisan bakery, activists slaughtered all the non-Muslim expats brutally. My sister called, my mother was crying, everybody got panicked knowing, this is the restaurant I often go to with my friends. My heart slipped realizing just a week before the incident I had the paella and scoops of Nutella seasoned ice cream with my expat friends.

I went numb, traumatized visualizing what if I was there that night. The terror I felt seeing the picture which accidentally ended up on my Facebook newsfeed stunned me- those chairs, those plates, that floor where I had some great times- were bleeding- bleeding with dissected bodies of people who had no idea that was their last dinner, people who were undeniably innocent and they would never know why they were killed so viciously.  I couldn’t sleep whole night. I never felt so far away from home. A thousand miles away my siblings were watching these on national tv and spent a sleepless night too. Some friends tried to comfort me with the fact that they are beheading the non-Muslims only & it happened in the tristate area where I don’t live in. So nothing to worry about for Brown Muslims like me.

My trepidation reached its level when some sources confirmed they killed two Bangladeshi girls, one of which was Ishrat AKhond.

Ishrat akhond- a Muslim, a Bengali, a law abiding citizen who went to have coffee with her expat friends in a calm Friday evening as the weekend started heating up. In the name of Islam ISIS claimed this attack to be carried out by their militants with a view to spread terror, fear and as they always brag- to establish Islam. Some sources said they mentioned while entering the eatery “we are here to kill the foreigners & non-Muslims only” during the hostage situation. Still they killed Ishrat, abinta & Faraaz. They let the hijabi women flee, but not the other girls who were not covering their heads with a piece of scarf. Is that how you define a Muslim girl? A Hindu waiter was saved from being beheaded cause obviously a man’s sartorial feature doesn’t explain whether he is Muslim or not, cause obviously it is not mandatory for “ISIS Islam” to cover certain body parts for Muslim men. But if I am a girl, I must get considered based on my outfit rather than my beliefs or my faith on my almighty. So is that how it will work now?

Are you PEOPLE going to justify my faith on Allah based on my attires? How about what I understand about any religion, including Islam, which I follow, is to be truthful, to not to harm anyone, not to kill any living things inhumanly, not to backbite. What about helping the poor and underprivileged -how about those rituals- Jakat, Hajj, kalima, Roja & Salat? What if I am not wearing Hijab but still I’m a firm believer of humanity and Allah, and Prophet Muhammad (S.A.A.W.)? What if I feel comfortable wearing jeans still I never forget Allah is the one and he is watching me, guiding me through the holy Quran and Islamic norms?

Is it all about dress up now? Is Islam so weak? Can a religion be so weak that it has to be idealized through couple of verses of Surah, and certain attributes? I have read Quran, I know how to pray salat, but still I’m sure if someone will ask me to recite verses while pointing a machete on my throat- I will even forget my name to remark. Does that mean you will take away my life in which you have no part to play? Has it been that simple lately?

I immediately came back home with 102-degree fever, underwent from high temperature next few days. For some reasons I got flustered because I wear jeans, I live in an area, where security enforcement is not so high, it is more radicalized than these so called tristate regions, safety is thinner than that of Holey Artisan bakery area.  I have expat friends who visit my home. I was having nightmares of being slaughtered by some unknown guy robed in black thawb shouting “Allahu Akbar- why you are not wearing hijab?”

I was grounded by myself the whole vacation of this Eid with a horror of being killed unknowingly in some anonymous suicide bombing event. I was rationalizing what to do, how to save my little self from being killed because of my dress up, and my lifestyle, as my mother kept on reminding me every day since 1st july not to wear anything western, and to start covering myself with a hijab from now on.

I was more panicked when my aunt’s first reaction to my greeting on Eid day was “stop dying your hair with fancy colour & weird styles and get a hijab”. I felt hankered and trembled with anxiety when my 5-year-old Niece said “they will kill you for having these on your hand”- pointing at my wrist tattoos. I felt like running away somewhere nobody will notice my existence while my cousins alerted me with ideas “strict your movements to upmarket restaurants and minimize your network”. I couldn’t consume the statement some people are making like “It’s a great lesson for girls who don’t cover themselves properly, or dress up inspired by western cultures”

I am scared now. I might have never understood as I often read these on news about the ISIS attacks or suicide bombing in Iraq or Syria, which seemed pretty normal to me, but the terror I’m feeling right now as I realized they are killing people I know, they are targeting some people around me, I cannot deny the fact that they are coming closer, may be residing in my neighbouring zone. Now I know how does it feel to see people you know getting killed.

As I was dressing up for my work today, I was questioned by myself about what to wear. I do not want to get slaughtered for wearing jeans. I was afraid they will shoot me because I have my hair dyed blonde. What If they stab me with a machete and leave a note saying she had nail polish on her nails? Little I had known that a religion can be all about its exterior traits, little I had known being a citizen of an independent democratic country like Bangladesh, all I could get is fear, fear of getting killed – fear of being beheaded by the extremists in the name of Holy Islam. Little I had known I have no right to choose my lifestyle the way I want, the punishment of doing so can be such dreadful vindictiveness.

I don’t know what to believe, whom to trust anymore. I can’t understand if there is any hope left to get back that peaceful country I was born into; I don’t know if I will ever get back those fearless fun evening with my friends at the coffee shops. Those valiant rickshaw rides in the overly crowded streets of Dhaka.

1st July- the night of terror, they didn’t kill 24 hostages only.

They killed our victory.