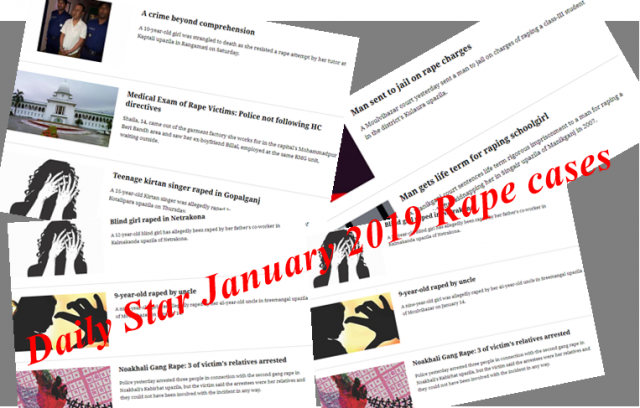 I was told to write something about the recent rape cases in Bangladesh during the January month. This is like a disease. There are already a lot of writings, criticism, comments and so on about it. But still, there’s no effect of it. Seems like rape news has become like a regular thing. A girl is never safe. Even if some men don’t touch a girl, they rape that girl with their eyes. No evidence, no media coverage, no criticism, no legal action will be taken but mental torture of a girl, broken pride and low self-esteem. Like some people accuse a rape victim of her clothing that she mustn’t wear covering clothes and other rubbish reasons. A rapist doesn’t judge. They just don’t care the age, complexion, if the woman is veiled nor they have sympathy towards other weakness. They want their prey at any cost. Women who travel on the local bus or bus often face some unwanted dirty touches. Some brave females may speak up and beat up the certain person for misbehaving but there are still some women who silently tolerate and scared to tell anyone because she might be judged. Even if a girl speaks up, she can’t protect herself immediately if a male attacks her out of nowhere. Because the bitter truth is a male physique is way stronger than a female physique. Not every woman is Maryana Naumova.

So, I thought to share my perspective and asked myself, even if I write anything will people be able to take it well? Even if I write a long this or that articles or others, it may not effect to anyone. Because people simply don’t care, they might not even read.

But some people do. For that “some people” I have questions to ask. What do you think? Will the common hearing word “Rape” ever be able to vanish from our lives? Just simply think!! We all have different answers. But people need to have an optimist mind that every problem needs a solution. And that solution needs to be applied.

Even If you want to sit and do nothing but eagerly want to witness the change of society at least you need to start the change from your home. Rather than saying your daughter “dress well”, ask your son to “Behave Well”. Teach the children how to respect every person. I repeat “TEACH THE CHILDREN HOW TO RESPECT EVERY PERSON”. Show them whom to respect and how to respect. There are certain sensitive things like “Menstruation” which mothers never want to talk to their boy child. Share with them and let them know! They should know. After a certain age, have a quality talk about the good and bad touch. Talk with the child. So, they can differentiate and stay careful. “Sex education” and “Self-defense” classes should be compulsory in every educational institution.

I have a younger brother whom I share everything. If I ever feel sick during my period he always understands me. He has the highest respect for a female which I can say proudly. I saw him do that.

Is this the only solution? No!! Like everyone, I also think that law and helplines should be temporary more aggressive about this type of cases and permanently more strict after every female feel secured in their own country. The leader of the country should give a good eye to the parliament, administrators, and subjects first before making any other changes. When people find themselves safe, they’ll try hard to make the country the best.

It is high time a female should be as safe as a male. How can we call a country is developing when women are already scared to death of losing their respect and dignity.

Chelsy Veronika Rema is a student of journalism and mass communication. She loves to write stories. If you want to read some of her stories here’s the link. https://www.bengalcreativehub.com/profiles/talents/adryana/

Chelsy is one of our new volunteer writers. Do you want to volunteer with us too? If so, Click Here to know more!