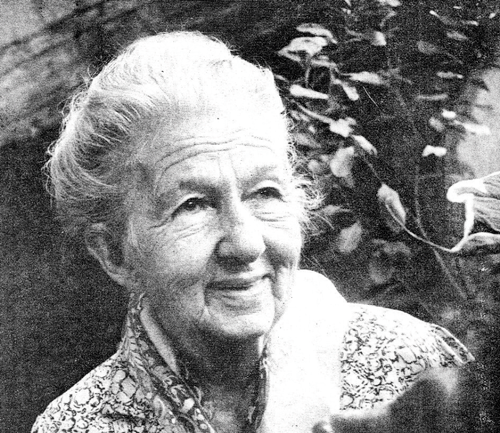 Once upon a time, there was a little girl named Cora who knew she was a poet. Her family did not think so. They did not want her to read books and they did not want to send her to high school. They thought her job was to find a good husband and raise a family. When she grew up, Cora fell in love with a man and they got married. She moved with him to the big city they had four children. She worked at all sorts of jobs to make sure her children could go to school. Cora had a busy life, but she never forgot she was a poet. She wrote every single day. When she was sixty years old, she decided it was time to start her career as a poet. Cora still needed money, so she baked cakes to sell on her doorstep along with her poems.
Cora’s poems started to be appreciated by other poets and writers. She won prizes and medals and – when she was seventy-five years old – she published her very first book.
Journalists came from all over the world to interview her while she was baking. And when they left, she sat back down at her desk and started to write again, surrounded by delicious smells of pies, cookies, and cakes.#inspiringwomen

Cora Coralina is the pseudonym of the Brazilian writer and poet Anna Lins dos Guimarães Peixoto Bretas (August 20, 1889 – April 10, 1985). She is considered one of the most important Brazilian writers. Her first book (Poemas nos Becos de Goiás e Estórias Mais) was published in June 1965.

She spent her working life as a confectioner in a small bakery, and where she drew upon her experiences of rural Brazilian culture to create her rich poetic prose, often featuring the Brazilian countryside, and in particular, focusing upon the life of the citizens who lived in the small towns across the state of Goiás. (Via Wikipedia)