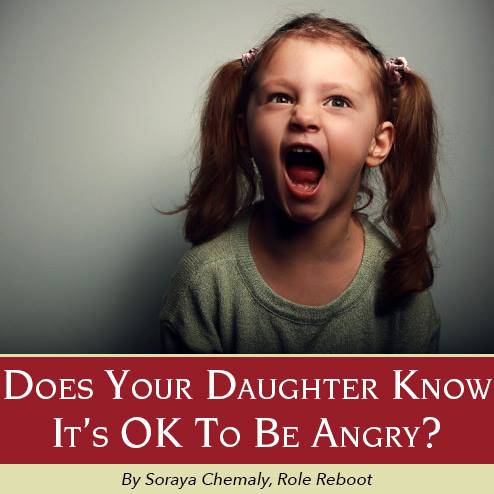 “Most girls and women understand the risks they take when they become angry,” writes author Soraya Chemaly. “No matter how justified, appearing angry won’t do her any favors and will actually undermine people’s perception of her competence and likeability.” Instead, “girls are more likely to learn that their feelings of anger, no matter the reason they have them, are ‘wrong’ and out of sync with their identities as girls.” That’s why Chemaly argues that “Girls need to know — and should be told explicitly — that it’s alright to feel anger. That it’s a healthy emotion that, as humans, they have the right to feel and express.” In fact, as she observes in her thoughtful new piece on girls and anger, “How we think of ‘anger management’ should more broadly include teaching girls that it is OK to feel angry.”

Girls and boys receive different messages about anger quite literally from birth: “In one study, newborns were dressed in gender-neutral clothing and researchers misled adults about their sex,” Chemaly writes. “Parents were far more likely to describe the babies they thought were boys as upset or angry than the girls, who they categorized instead as nice and happy.” As girls grow older, “parents and teachers expect girls to be able to control themselves more [than boys].” However, repeatedly having to swallow their anger can end up altering girls’ understanding of their own emotions; eventually, “girls lose even the awareness of their own anger as anger… Adaptable girls find socially acceptable ways to internalize or channel their discomfort and ire, sometimes at great personal cost.” And, the impact over time is not just emotional but also physical: “Unresolved anger contributes to stress, tension, anxiety, depression, and excessive nervousness. It is now estimated that 30% of all teen girls have anxiety disorders.”

Girls’ anger often grows as they reach their teens, because studies show that girls and women are more likely to feel anger about injustice, powerlessness, and other people’s irresponsibility — all things they confront head on as they approach adulthood. “They begin to see the effects of gender–based double standards that fly in the face of everything they’ve learned so far about their abilities, equality, and potential,” Chemaly writes. “Street and sexual harassment are common occurrences, including at school. They learn about sexual assault, if they have not already been assaulted (43% of assaults happen before the age of 18). They adapt to having to restrict themselves…. They are navigating the stressful tension between managing their own sexuality and the crush of women’s pervasive sexual objectification.” In other words, “while anger in girls and women is overwhelmingly portrayed as irrational, it is, in fact, completely rational.”

So what can concerned parents and educators do? First of all, we need to let them know they’re allowed to express their anger as long as they don’t resort to “violent, disruptive, or entitled behavior.” We also need to watch for how girls may conceal or misdirect their feelings: “Sarcasm, apathy, and meanness have all been linked to suppressed rage. Troublesome behaviors, such as lying, skipping school, bullying other people, even being socially awkward are often signs that a teenager is dealing with anger that they are unable to name as anger.” Finally, we need to teach girls that, if their anger is justified, they can channel it to work for real change: “Women who make less than their male peers, for example, are four times more likely to suffer from anxiety and 2.5 times more likely to suffer from depression. Imagine what would happen if they could get angry instead?”

You can read Soraya Chemaly’s entire piece on HuffPost at http://huff.to/1RXKUCd

Reproduced from: A Mighty girl