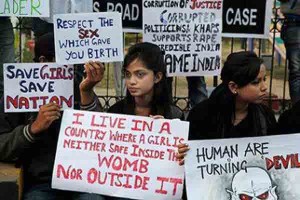 Nandini Shahla Chowdhury: I am a woman and since 14 April 2015, I am neither at ease nor at peace. Much obviously, I am referring to the sexual assault incidences took place on that day. To my dismay, I came to know that such incidences are taking place in Dhaka University area since last February. On every national day, whenever a massive crowd gather in that area, these men attacks women, irrespective of their age and assault them brutally.

I am shattered- to learn that my beloved campus is not anymore safe for me. I am ashamed to know that these people, no matter whether they are students of DU or not, find DU a safe place to carry out such atrocities. I am ashamed that my campus is now brewing violence; from killing of Avijit to this.

I am shocked to know that our TV channels broadcasted it live. After that, we heard no buzz from mainstream media. None from the political sphere uttered a single word. Mayor candidates who want to build a safe Dhaka did not include a single line in their manifesto about going hard-line about such incidents or about taking preventive measures. None of the police officers who were responsible to provide security on that very spot received a show-cause notice. None of the offenders got caught; even with having more than thousand eye-witnesses, CC-TV footage and TV videos. Not a single probe committee is formed to dig out facts of these strategic attacks. Rather respected proctor of DU went live on TV and almost blamed Liton Nondi for disseminating false message on the incident.

We saw uproar in social media and kept on wasting our breathe in social networks. We, the women, started sharing posts on how to prepare home-made pepper spray, the necessity of carrying paper cutter in our purses.  We learned that sharee, the actual traditional attire of Bengali women is provocative. We learned that “modern women roaming “naked” is freedom and taking off their clothes are offense is a double standard”.

I saw numerous posts on eve-teasing rather than sexual violence. We still can’t differentiate between romanticizing eve-teasing and conceiving the intensity of sexual harassment and violence. We saw posts with celebrities saying that women are mother and sister; so they need to be respected. As a student and practitioner of mass communication; I understand the appeal of personal touch and personal relevance in campaigns. Again what terrifies me is the subordination of women in private sphere as mother or sister. Does having a mother or sister make a man sensitized or respectful to other women? Obviously not. All these men have mothers at least. But such statements form celebrities are certainly pulling us apart from our human identity and re-enforcing our mother-sister identity.

What about my rights as a human? Why do I have to seek refuge from my father-brother-husband? Why violence against women is still not a security concern? Why police is only responsible for checking on bombs and weapons and not on perverts? Why such incidences are happening continuously and the authorities get away with their precious silence? Are these scattered incidents or part of strategic attacks against our cultural identity? Shall we just accept that these are just scattered incidents and a few may fall victim every year as collateral damage of celebrating pohela boishakh? What if going away without punishment encourage these people so much that such incidents start taking place everywhere; in front of school, college, girl’s hostel? We are now paying the price of the massacres of our intellectuals in 1971; establishing war criminals as ministers and patronizing religion-based politics with generations which are moved only by item songs.

I am worried. Worried for me who has to run form one part of Dhaka City to another for her job. Worried, for my sister, who has to maintain her job as well. Worried, for my 10-year-old niece, who loves celebrating Boishakh; who already loves wearing share; just like her mother-aunt-grandmother. State is not interested to protect me, my office cannot do it outside its premises; my husband or I am nothing in front of a mob.

I recall my sister’s never adjusting with Dhaka University because she fell within a mob during university admission test and experienced brutal assaults. Being a brilliant student all through her life, she could not outshine this traumatic experience and ended her graduation with a mediocre result. She tried her best to not attend classes. We being her family member had nothing to do rather than blaming her for not getting over the trauma.

I am still lucky (apart from the regular minor harassments). How long am I going to be?

I have no idea. I am frustrated and shaken to the core.