In the wake of the #metoo movement, 16 self-defense workshops in 16 countries during 16days of activism against gender-based violence.

2017 marks the 26th years of 16 Days of Activism against Gender-Based Violence – An international campaign to challenge violence against women and girls around the world. The campaign runs every year from 25 November, the International Day for the Elimination of Violence against Women, to 10 December, Human Rights Day.

For many girls and young women, sexual abuse and harassment is, unfortunately, part of their daily routine. From being leered at, to being groped, verbally abused and even masturbated on, girls and young women are at a constant threat of being sexually assaulted. Crowded streets, buses, trains and other public spaces are the most common locations for such assaults. Such public sexual harassment is colloquially called ‘eve teasing’ and has become so institutionalized in our society that more often than not, young women and girls are advised to ignore it.

As a result, women and girls are constantly on guard, fearing everything from the verbal harassment and groping they suffer in public spaces and on public buses to far more violent assaults like marital rape and domestic violence. Gender-based violence, in both public and private spaces, is a global pandemic and has crippling effects on the women and girls themselves and the community as a whole.

Sayfty in partnership with UN Women, The United Nations Inter-Agency Network on Youth Development’s Working Group on Youth and Gender Equality and other key partnering organizations has organized 16 self-defense workshops in 16 countries for young women (aged 15-30) to empower them with basic self-defense skills to keep them safer from gender-based violence. The event also presents an opportunity to evaluate the lack of safe solutions to address the problem of violence against girls and young women and takes a closer look at the role of body autonomy and self-awareness. 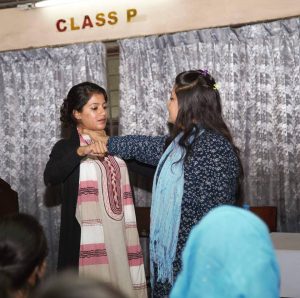 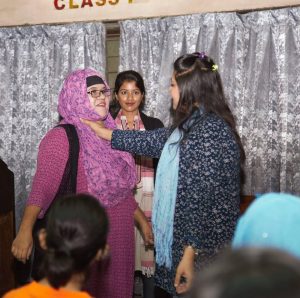 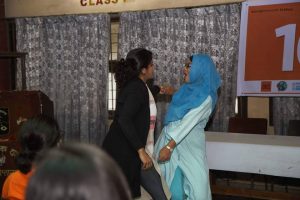 As part of the Bangladesh initiative, AIM Initiative Foundation andEvolution 360 with partnered with Peoples Radio 91.6 FM to conduct a workshop in Dhaka on December 9, 2017. The workshop was organized at Dhaka University and attended by 33 young women. The objective of the workshop was to focus on few self-defense techniques, which can help girls stay alert and safe in daily situations. “The feedback we are getting from participants around the world is, that more of

such workshops are needed. Self-defense for girls should become an integral part of school curriculums” says Dr. Shruti Kapoor, Founder of Sayfty

About Sayfty: Sayfty is a global organization that educates and empowers young women and girls against gender-based violence. Sayfty’s vision is to make the daily lives of millions of women safer by empowering them to take a stance against gender violence. www.sayfty.com/16days

About Evolution 360: Evolution 360is a youth-led community organization which basically focuses on the development of youth and empowering women in the community, by establishing gender equality through different pragmatic and implementation of projects.