“…I heard a series of popping sounds. Thinking the Russians had arrived, I slunk to the window. But what I saw was worse than anything I had ever seen before, worse than the most frightening accounts I had ever witnessed. Two Arrow Cross men were standing on the embankment of the river, aiming at and shooting a group of men, women and children into the Danube – one after the other, on their coats the Yellow Star. I looked at the Danube. It was neither blue nor gray but red. With a throbbing heart, I ran back to the room in the middle of the apartment and sat on the floor, gasping for air.” – accounts from a Hungarian survivor.

There are very few teachers who can teach you about life as much as traveling does. Traveling is not my profession, it is neither my passion. I travel for the fun of it. I travel to walk on random streets to let my mind come across epiphanies that teach me about the world, about life. This winter when I was traveling across a few cities in Eastern Europe, I came across a place that has left an indelible mark in my mind. Living in a world where every aspect of life has been commercialized, where a person’s self-worth is based on their social media followers, there are very few places that actually put everything in perspective: how fickle and insignificant human life can be. This was one such place.

On the Pest side of the Danube River flowing through the heart of the capital city of Budapest, very near to the Parliament, is a line of about 60 pairs of old-fashioned shoes sculpted out of iron. Shoes of men, women, children, humans. Some with worn-down heels, others have laces, some have straps left open, some are women’s pumps, some are extremely shabby, some are standing up, some are strewn around as though hastily removed by their owners, and then there are tiny shoes belonging to children. They sit there on the edge of the river as if the owners have just stepped out of them. Instantly one asks the question, “whose shoes are these?” 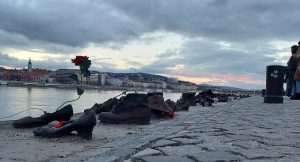 “Shoes on the Danube Promenade” is a memorial to the individual Jews who were murdered in the winter of 1944-1945 by the members of the Arrow Cross Party in Hungary. The murders were in such high numbers that the Danube infamously came to be known as “the Jewish cemetery”. Imagine a river flowing through ten countries carrying hundreds of dead bodies. Imagine the horror. Imagine! It is extremely important that we imagine, it is important we understand the profound terror and inhumanity of the incident. It is crucial that we understand how inconsequential human life was to power and prejudice, in order to prevent history from repeating itself.
The reason why the memorial leaves such a strong impact is the fact that the existence of the shoes (and their owners) is tangible. Sitting there on the bank of the Danube, looking at those shoes, one can almost time travel and watch the horrific events unfold: the terrified people brought to the bank, forced to take off their shoes and then shot dead, their helpless bodies plunging into the freezing waters of the river. What makes the memorial furthermore striking, is that each pair of shoes belonged to a real person, and just by the look of it one can conjure the human being who owned the pair. The shabby ones must have belonged to the worker, the pretty heels must have had feet decked up in silk stockings, maybe she was a young girl with dreams just like one of us, that tiny one must have belonged to a toddler who has just realized the fun of running with the wind gushing through his hair: all real humans, all lives with potential cut short by power-blinded prejudiced people who has the same blood flowing through their veins. And just that simply, the artists Togay and Pauer, have successfully created a memorial which turns some statistics, some petty numbers of war into real, living, breathing humans whose existence needs to be acknowledged. The monument sent chills through my spine for you can put yourself in the shoes, both literally and figuratively, of the innocent people whose faces were obliterated through no fault of their own.

The reason behind my writing this narrative about this place is because it is of extreme importance to remember what the world has gone through. It is important to be aware of the horrors that humans inflicted on fellow humans. It is important that we are always in touch with our conscience and refuse to let anything get the better of us other than humanity, compassion, and love: these are the things that keep the world going, these are what the world needed, needs, and will always need.

“My name is Hridi Halder and I am a Master’s student at LMU, Munich studying Molecular and Cellular Biology. I am from Kolkata, India. I graduated from St. Xavier’s College, Kolkata with a Bachelor’s degree in Microbiology. Besides life sciences, I have a keen interest in literature. I enjoy reading Toni Morrison, Sylvia Plath, and occasionally Sartre. I am a Tagore enthusiast and very confused about the world. I absolutely can not survive without traveling. Big fan of mountains and oceans and anything that put things into perspective. I want to say that I am a woman in science but first I want to contribute to science and to humanity at large. “