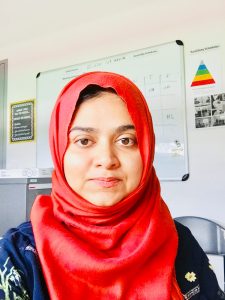 In a fit of despair, I closed her medical record file and looked out of my clinic window…..

In the suburb of posh streets and houses where women were crossing streets, buying fruits from vendor carts, walking in parks with children. Some of them with uncovered faces and others with covered faces. In a bustle of transport services like buses, rickshaws, and cars, so-called “pious and virtuous men” were passing through the streets, keeping their cladded women at a “significant distance” from others. A disheveled man with a religious cap on his head in a middle of crowd, noise, and smoke touched a girl inappropriately who was passing from his side.

She got terrified; he was lecherously looking at her body. No one saw this and the girl sped up her pace to get out from the area. The man kept watching her with a wide grin on his face, triumphantly.

She was not sure it was a deliberate attempt or a coincidence but his grin was more pronounced to let her know about the possibility of a former thought. She was asked by her mother to keep silent, not to mention this to anyone in a family and also advised to take alternative route next time (as if it is her mistake to take this route).

“What?” Mama came from the kitchen in disarray.

“You know what! brother is watching dirty scenes on a TV, I just caught him”.

In a second she felt hot smash on her cheeks. Mama slapped her hard.

“I told you several times not to go to his room, still you try to get there anyhow, how should I restrict you?”

This response was appalling for her. She started thinking “is this my mistake to go to brother’s room! Is it my mistake to pinpoint my brother if he is doing something wrong?”

Mother tightly covered her head with a scarf, and bend down her face a bit to look into her eyes, “you must sit opposite to your male teacher and only brother would sit with him. OK?”

I nodded my head.

“And if he asks you to come closer or touch you anywhere then you must call me”.

It was a dark night and somebody has pushed her hard. She fell on a ground and heard someone’s cry, she immediately got up and turned on the light. Her cousin was gasping and sobbing.  She took her cousin into her arms and tried to console when the cousin threw her away, shouted vehemently: “Your brother is a rascal, he tried to …!”

Since then, she always had a hard time understanding why that cousin’s mother (her aunt) stopped talking to her mother. One day, she asked her mother and she told her about cousin’s stories of relishing multiple affairs of sexual nature at college and in neighborhood areas.

“She just wants to malign my son and your brother’s name.”

Aunt and her cousin have never visited them since then. She believes her cousin must be a bad girl as mother says.

Practicing religion and its ethos can never bring light to people souls and minds until and unless its message is not understood properly. External codes of practice including clothing, appearance, prayers, fasting, recitation, and charity do not make any difference if it is not supplemented by the purity of a soul. Gender discrimination is a contemporary trend in most of the conservative societies and culture. It is mostly because of inept knowledge of a religion, poor education and exposure of girls and improper and unbalanced nurturance of girls in a society. All these factors lay down a bias and prejudiced foundation of any nation whereas its fractured configuration reveals itself from time to time through various daily life incidents.

Hena Jawaid is a  psychiatrist by profession and currently based in Australia. She is currently working in an academic setup and endeavor to promote women in every pace of life.