Chaupadi is one of the most talked topics in conferences home and abroad. It is no doubt one of the grave social issues in Nepal. Most of these talks revolve around menstrual huts. But how effective these talks were/are in combating the issue, which has several aspects other than huts, is a matter of concern. What needs to be understood is that chaupadi is an institutionalized social system based on the common belief of purity and pollution.

It is a dysfunctional social reality which cannot be eradicated by seldom roundtable discussions in the capital. It has established itself as a source of an entrenched form of stratification. The practices/activities under chaupadi can be divided into two categories. First is the physical or tangible category, where materials, the availability or absence of which makes meaning. A separate hut, a separate bed, a separate set of utensils, separate set of clothing are few of the examples. The second is the behavioral or intangible category where attitudinal and behavioral expectations come into play. The sanctions on touching others, banishments, restriction on visiting holy places can be some examples. 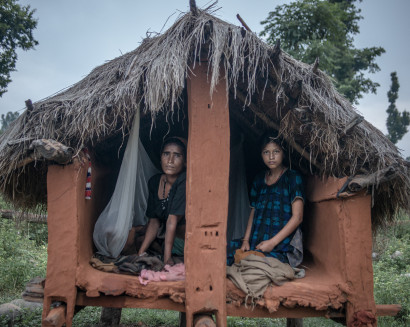 If we carefully observe, the concentration of awareness programs, campaigns and projects seem more evident in disrupting the tangibles, for instance, demolishing huts, in particular. The problem here is that now people are seeking alternatives to menstrual huts. They are still reluctant to let menstruating women inside the main house, so they are now building concrete huts, which in their defense are much safer because no wild animals can attack women in concrete huts. Awareness programs also seem ineffective in combating chaupadi, maybe because such awareness programs largely target youth, who most of the time are already aware. Demolishing huts has not proven to be very effective in eradicating the system; instead, it has brought alternation in forms of practice; from mud huts to concrete huts. Awareness programs for elderly may help address the issue more effectively but would it be able to eradicate it? It is very doubtful. But this is not the dead end. It is just that more needs to be done. Chaupadi is based on deep-rooted superstitions. It has occupied a significant space in the conscience of people, especially women. If we look at the statistics, chaupadi is practiced “more” in far western part (which now falls under province number 7) of Nepal, which is said to be one of the least developed regions of Nepal. According to the Human Development Index (HDI) Report 2014, the Far West recorded 0.435, the lowest in the country.The economic and social backwardness of this region and also lack of proper political representation has strengthened social issues such as chaupadi.  Lack of quality education, unemployment, and economic dependency among women has left them with no choice but to abide by the norms set by ancestors and elderly.

To undermine the occupancy of chaupadi in the conscience of people, a space filled with thoughts on things of greater importance needs to be created. And this can be achieved by engaging women in meaningful activities. Home confined, unpaid chores restrict women in so many ways. Not all but the maximum of social issues sustain because of sustained unemployment. They feed and survive on economic vulnerability of people. Demolishing huts is just one of many means. It cannot in itself be a complete solution. It does weaken the system, but only temporarily. Meaningful engagement of the affected group i.e. women in paid activities, participation in the public sphere, good exposure to enhance their economic condition are few of many things need to be done to undermine the strength of chaupadi. The state needs to play the major role. In order to accurately address chaupadi, the state leaders should come up with programs which not only make people aware but also, more importantly, help women build their capacities and provide them ample opportunities to attain economic independence. The state government should be able to persuade people in realizing the most needed change in the province i.e. changing the status of the far west as a backward region to a developed one. The need of the state should be stated and laid in such a manner that it makes all superstitions based on the concept of purity and pollution look small and insignificant. The state can do so by being present among people and increasing the participation of people. Of course, the roles of non-government organizations are also very important. The achievements so far, small or big are because of their projects and campaigns. But for sustainable change more needs to done by the state. Direct intervention in enhancing women’s economic status is the need of the time.

Rupashree Niraula is a lecturer of sociology in Mahendranagar, Nepal.  She has been in the field of education for more than 4 years. She is an MA Sociology graduate from Tribhuvan University. She is also the recipient of Suman Rijal Padak (Gold Medal), in MA Sociology for the year 2014.